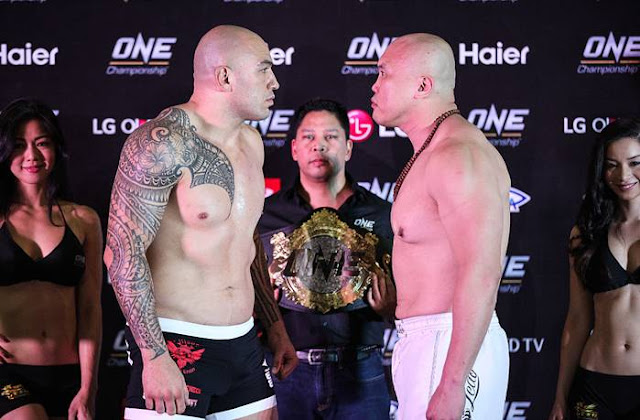 10 December 2015 – Manila, Philippines: The largest sports media property in Asian history, ONE Championship™ (ONE), announced today that the mixed martial artists competing at ONE: SPIRIT OF CHAMPIONS have made weight and are ready for all the action which takes place tomorrow evening, 11 December, at the state-of-the-art Mall of Asia Arena in Pasay City, Philippines. In the main event, Brandon “The Truth” Vera will take on Paul “Typhoon” Cheng for the inaugural ONE Heavyweight World Championship.

Visit the official ONE: SPIRIT OF CHAMPIONS weigh-in photo gallery by clicking: https://www.dropbox.com/sh/6k384krsvdao0f3/AABoZfKfuYDUszYYrjf_77sta?dl=0

Brandon “The Truth” Vera of the Philippines stated, “Big ups to Paul Cheng for taking this fight on short notice. It takes a warrior-mentality and a lot of guts to step inside the cage, especially against a guy like me, but we put it all on the line for the fans. This fight means a lot to me, my family and my country, and I will do everything in my power to bring home the belt. I’m ready as I’ll ever be.”

Paul “Typhoon” Cheng of Taiwan stated, “This is definitely the toughest fight of my life. Brandon Vera is one of the most well-known fighters in the sport. I don’t expect anything easy by all means, but I’m always down for a good scrap, even if the fight goes one round or five. I’m never giving up. I have a lot to fight for – I’m fighting for the people of Taiwan, represent! I’m ready to get in there and put on a show.”

Tickets for ONE: SPIRIT OF CHAMPIONS, are still available at www.smtickets.com.

Fans from around the world can witness the action online via live streaming at www.ONEPPV.com. The event will be available for purchase at just US$9.99.

ONE Championship is the largest sports media property in Asian history. Headquartered in Singapore, the world’s most exciting mixed martial arts organization hosts the best Asian mixed martial artists and world champions, all signed to exclusive contracts, on the largest media broadcast in Asia. ONE Championship™ has partnered with FOX and STAR Sports for an unprecedented 10-year cable television deal with a coverage that spans 70+ countries across the world.
Posted by Boy Raket at 1:00 PM