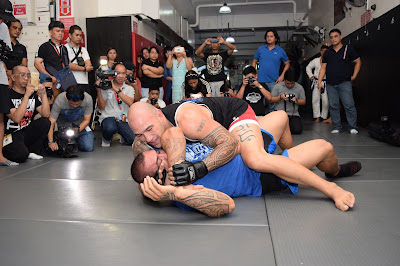 Just a few days ahead of ONE Championship’s annual year-end show in Manila, Philippines, Filipino Mixed Martial Arts superstars Brandon “The Truth” Vera, Mark “Mugen” Striegl and Ana “Hurricane” Julaton appeared at the KMA Fitness Gym in Makati to showcase their skills to invited media in an ‘open workout.’

The trio will represent the Philippines, along with a posse of local fighters, at ONE: SPIRIT OF CHAMPIONS, which takes place Friday, December 11 at the Mall of Asia Arena in Pasay City.

“I just can’t wait to kick his ass,” said Vera, who will be competing for the inaugural ONE Heavyweight World Championship against former English pro-basketball player, Chi “Chopper” Lewis-Parry.

The life of a fighter is a long and arduous one, with countless nights spent in a sweltering gym, wailing away at leather, honing a craft that will be ultimately responsible for either victory or defeat.

Yet for a veteran like Vera, it’s something that simply comes second nature to him.

Across the spectrum sits bantamweight standout, Mark Striegl, who is one of the most talented fighters in his division. Striegl too is of Filipino origins and calls the Philippines his home.

Striegl is coming off a huge win over the highly-regarded Casey Suire last April, and owns a 14-1 record going into Friday night’s matchup.

He takes on Reece McLaren (7-3) of Queensland, Australia.

“To be fighting for ONE in the Philippines is a dream come true for me,” said Striegl. “My opponent is a champion from Australia and I know he is a tough one.”

Striegl now lives and trains in Singapore as a member of the Evolve Fight Team, where he works out with various world champions in different combat sports.

“I’ve never been in a boring fight and I will always go for a knockout,” Striegl added.

Among the boys, stands a lone female warrior -- former boxing world champion Ana “Hurricane” Julaton who makes her much anticipated return to the ONE Cage.

Julaton has been working tirelessly with legendary MMA coach Ricky Lundell in Las Vegas, and by all accounts, fans are expected to see the best version of Julaton yet.

“Everyone has their own style, but I have my own style that I am comfortable fighting with,” said Julaton.

“Anyone who has been watching my first three fights can delete that image because that’s not the same Ana anymore. I feel that time I was a boxer stepping into MMA but now I am different.”

Julaton had figured in two wins with one loss so far, since transitioning to MMA. The move had been somewhat difficult as Julaton tried to adjust to different fighting disciplines. Her work in Las Vegas however, promises a new and improved Julaton, one that is ready to take the MMA world by storm.

“I’m used to going to a boxing gym, putting my shoes on. Now I have gotten used to a new environment when I go to a wrestling gym.”

Vera, Striegl and Julaton are ready, as are the fans, for an evening that should be nothing short of spectacular.

Email ThisBlogThis!Share to TwitterShare to FacebookShare to Pinterest
Labels: Brandon Vera, ONE Championship, ONE: SPIRIT OF CHAMPIONS