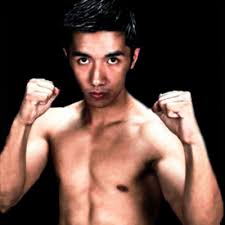 While some fighters crumble at the mere hint of resistance, ONE Championship flyweight Geje “Gravity” Eustaquio of Team Lakay revels in it, maintaining a cool, calm demeanor in the face of imminent danger. Because of his icy composure, Eustaquio has been able to hang tough with some of the best fighters in his division.

On Friday night, December 11, at the Mall of Asia Arena in Pasay City, Philippines, Eustaquio (6-4) will take on China’s Yang Jianbing (5-1) in a three round flyweight contest in front of Eustaquio’s hometown Filipino crowd.

Eustaquio figured in two straight losses in his most recent outings, but it came against two solid opponents.

In September of 2014, Eustaquio challenged Brazilian Adriano Moraes for the ONE Flyweight World Championship in Cambodia. He lost by submission in the second round. In April of the following year, Eustaquio dropped a split decision to Thailand’s Anatpong Bunrad.

Though things have not exactly gone to plan, Eustaquio is still considered one of the most talented strikers at flyweight. Many of his peers are bigger, longer and more powerful, but few exhibit the kind of composure Eustaquio displays in the cage.

“It doesn’t matter how aggressive or strong my opponent is,” said Eustaquio.

“As long as I stick to the game plan laid out to me by my coaches, I will remain relaxed and composed no matter what. It’s all about sticking to the game plan. We work hard in the gym so that in the fight, I am never shaken.”

Eustaquio has been in the cage with the best, Moraes and Bunrad most recently.

Moraes, more of a grappling threat, was able to lock in a submission on Eustaquio but not after being out-classed in the striking department. Eustaquio also gave as good as he got against the intense Bunrad, eking out a split decision loss in an impressive performance.

In his first fight for the promotion, Eustaquio bested Brazilian Jiu-Jitsu ace, Alex Silva, showcasing great submission defense but Eustaquio knows he where he needs to improve his game.

“I need to improve my grappling confidence,” said Eustaquio. “I need to be able to grapple well enough to be confident in any situation on the ground. That’s my goal.”

The Filipino fighters up in Baguio City, where Eustaquio is from, are arguably the most talented mixed martial artists in the country today. The area has produced popular fighters like Eduard “Landslide” Folayang and Kevin “The Silencer” Belingon. Even Mark Striegl had once trained for a long period in the ‘City of Pines’.

Eustaquio is in great company.

Like his fellow Filipino superstars, he continues his career on Friday night, with one thing in his sights -- another crack at the ONE Flyweight World Championship.

“I am working towards getting another shot at the title. I am ready for the opportunity.”
Posted by Boy Raket at 3:45 PM