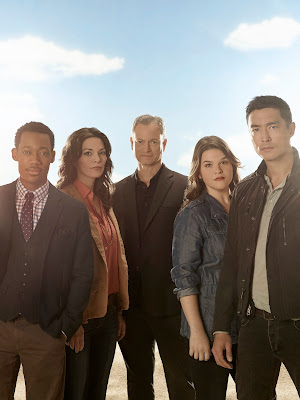 Criminal Minds: Beyond Borders looks at the specialized International Division of the FBI tasked with solving crimes and coming to the rescue of Americans who find themselves in danger while abroad.
Created by Erica Messar as a spin-off to the highly popular Criminal Minds franchise, this new series examines cases of abductions, hostage taking, extortions, threats and other criminal activities posed by increased cross-border travel, globalization, and technology freedom.
The backdoor pilot was first introduced as an episode on the flagship show where an innocent family of four was abducted while vacationing in Barbados. The new series will continue to travel to Spain, Tokyo, Thailand, Mumbai and Paris investigating crimes that include the religion, culture and politics of the different countries.
Starring Gary Sinise as Unit Chief Jack Garrett a seasoned 20-year veteran of the Bureau, his team includes Clara Seger a smart, well-traveled and multi-lingual cultural anthropologist played by Alana De La Garza. Heart throb Daniel Henney is Matthew Simmons, a former military hero while Tyler James Williams plays the unit’s compassionate, brilliant tech analyst, Russ “Monty” Montgomery. Annie Funke rounds out the group as Mae Jarvis, the team’s fearless and fun medical examiner.

These exceptional agents are dedicated to protecting US citizens and returning them home by profiling and identifying criminals who target them beyond borders.
Criminal Minds Beyond Borders premieres on Thursday, March 17 at 9.45pm first and exclusively on AXN, within 12 hours of the U.S telecast.


About AXN
AXN is Asia’s leading general entertainment channel featuring exclusive top-rated drama series, blockbuster features, reality programs and ground-breaking original productions. The channel appeals to a discerning audience seeking content that is smart, intriguing and unexpected, and all delivered close to U.S telecasts. From The Blacklist and Quantico, to The Voice and The Amazing Race Asia, AXN is defined not by a genre, but by an attitude that truly redefines action.
Launched first in Asia in 1997, AXN is a global channel brand with a presence in Latin America, Africa and Europe. In Asia, the channel is enjoyed in 85 million households across 20 territories.
AXN Asia is wholly owned by Sony Pictures Entertainment and managed by Sony Pictures Television Networks, Asia, which also operates leading channels including Animax, Sony Channel, ONE and GEM.