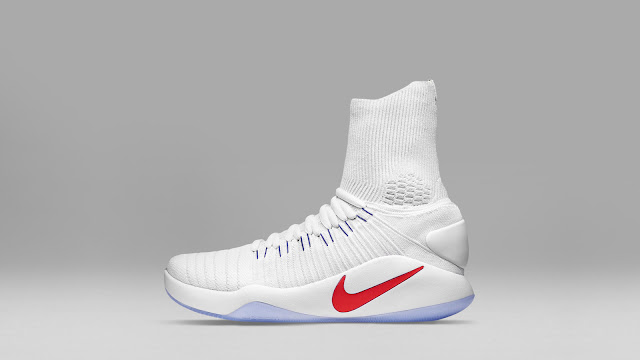 Eight years after its 2008 debut in Beijing, the Nike Hyperdunk unveils a striking technical and stylistic evolution ahead of summer competition in Rio. Combining an ultra-high Nike Flyknit upper with an enhanced, precisely positioned full-length Zoom Air unit, the Nike Hyperdunk 2016 serves the speed, lateral cutting, elevation and impact of the modern game.
The shoe’s high-cut Flyknit upper was specially crafted to provide an enhanced locked-in feel. Along with extending the collar, Nike designer Leo Chang paired targeted zones — for lockdown support, dynamic stretch and breathability, respectively — with Nike Flywire cables. Integrated into the forefoot, they provide supplemental support where it’s needed for pivots, cuts and jumps.

Working in tandem with the upper to provide natural, intuitive movement that is lightweight, supportive and comfortable, the shoe’s new Zoom Air unit runs the length of the foot. By positioning the Zoom Air unit directly under foot, a hollow core between the unit and the outsole is created, resulting in an unmatched snap-back, trampoline effect. The shoe also features advanced herringbone traction and a supportive heel counter.