Ben Askren returns to ONE Cage to face Russian foe 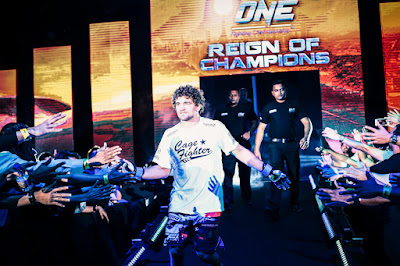 ONE Welterweight World Champion Ben “Funky” Askren would like nothing more than to return to the cage and do what he does best and that’s to get in, dominate, and get out. The 31-year old former NCAA Division I wrestler from Arizona has been out of competition for nearly a year, but the good news is, he’s about a month away from climbing back in.

Askren (14-0) will face Russia’s Nikolay Aleksakhin (17-3) in a five round welterweight bout for Askren’s title. The bout will headline ONE Championship’s first event in Manila this year, called ONE: GLOBAL RIVALS.

Last April 2015, Askren battled hulkish Brazilian foe Luis “Sapo” Santos to a No Contest ruling after Santos deemed himself unable to continue after an inadvertent eye poke. A highly-anticipated rematch was scheduled months later in Singapore, only to have Santos miss weight and the bout cancelled at the eleventh hour.

In the first bout, Santos used his indomitable size and strength to throw Askren around like a ragdoll, manhandling him like never before seen in his career. Inevitably however, Santos began to fade and it started to look like Askren was about to take over -- and then the bout was cut short and the rest was history.

Since then, Santos has moved on for the time being, as he defeated Portuguese fighter Rafael Silva just last month in Jakarta, leaving Askren to deal with Aleksakhin.

Though Askren and Santos are still expected to cross paths sometime in the near future, Askren will have to successfully defend his belt against his Russian adversary to set the stage for the Santos rematch.

For his part, Aleksakhin is certainly no pushover, having won his last six bouts while notching three technical knockouts and a submission win to his credit.

He’s competed largely in his native country for most of his career, but last November, Aleksakhin debuted for ONE Championship with an impressive third-round rear naked choke of Mongolia’s Burenzorig Batmunkh. He’s expected to give Askren a stern challenge at the very least.

Askren is an All-American and collegiate wrestling legend. In just a few fights in ONE, Askren was able to seize the ONE Welterweight World Championship with a resounding technical knockout victory over Nobutatsu Suzuki in 2014.

The highly-skilled Askren is also widely considered to be the absolute best in his division and one of the best fighters in the world pound-for-pound.

Whether or not there are enough welterweight fighters out there like Aleksakhin and Santos to provide the American with a steady stream of worthy challengers remains to be seen.

For now, Askren is content with making that trip halfway across the world to Asia from his home in Phoenix twice a year to show fans what a world-ranked athlete looks like.

If he defeats Aleksakhin like he is supposed to, expect talks of another Askren-Santos bout shortly after.