Masters of Illusions Captivating Audiences in Asia this March 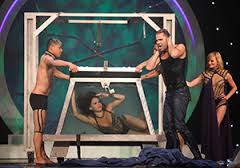 Originally performed  at the Magic Castle in Hollywood back in the early 2000, Masters of Illusion was revived for regular airing on television.

Featuring some of the best magicians in the world, each episode is a visual treat. Whatever your brand of magic is, the show has something for you. See mentalists, illusionists, and escape artists, just to name a few. Relive your love for this classic entertainment that’s full of modern twists.

Viewers should brace themselves for mind-boggling illusions, amazing sleight of hand, breath-taking escapes and even laugh out loud comedy routines.


About Sony Channel
Sony Channel is the premier destination for female-skewing entertainment with the biggest and best of Hollywood. Designed for the socially connected viewer, Sony Channel features some of the most captivating and talked-about drama, comedy, lifestyle and reality programs on TV, all airing close to the U.S. telecasts, together with popular feel-good movies.
Fresh, confident and stylish, with a dash of clever wit, Sony Channel is visually stunning with a brand identity that perfectly complements its line-up of high calibre programming.  Sony Channel appeals to a female-skewed, male-inclusive audience who loves to escape, engage and lose themselves in premium content. Viewers are modern, social, stylish and aspirational.
Sony Channel is wholly owned by Sony Pictures Entertainment and managed by Sony Pictures Television Networks, Asia, which also operates pay-TV channels AXN, Animax, ONE and GEM. See www.SonyChannelAsia.com, and joint the conversation on www.facebook.com/SonyChannelAsia and https://twitter.com/SonyChannelAsia for more.