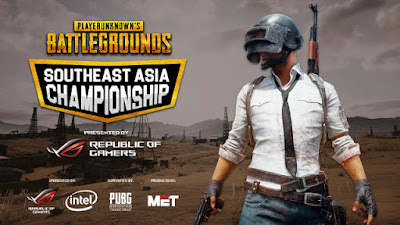 PlayerUnknown's Battlegrounds (PUBG), the internationally acclaimed 100-man battle royale esport developed by PUBG Corporation, has set the challenge for aspiring Southeast Asian PUBG players. MET is on the search for the absolute best PUBG squads as they announce the PUBG Southeast Asia Championship presented by ROG. The competition is officially sanctioned by PUBG Corporation, and is part of the lead up to the recently announced PUBG Global Invitational (PGI 2018), to be held in Berlin on July.

PUBG’s appeal has captured the attention of many players across the globe. The 100-man scavenging and survival battle royale game has players forming squads of up to four members in an attempt to eliminate the rest of the competition to come out on top and claim the top spot of each game. The naturally competitive nature of PUBG has spawned multiple games with similar mechanics and helps form the game itself into a fully-fledged esport.

ASUS Republic of Gamers (ROG), the world’s #1 gaming brand, is choosing PUBG as their newest grounds for competitive gaming. With its full squad of professional gaming products, ranging from motherboards, graphics cards, monitors, notebooks, peripherals, and routers, ASUS ROG is set to deliver the best gaming experience in this year’s biggest competition in the region.

The PUBG Southeast Asia Championship is MET’s latest regional tournament, a true testament to MET’s claim as the top esports organizer in Asia. MET continuously delivers optimal esports tournaments for both aspiring and professional gamers across the entirety of Asia. The PUBG tournament will run concurrently across five venues with six nationalities on the road to the SEA regional final.

Pride and glory are all on the line, as both the Thai National Champions, as well as the overall Regional Champions will be moving on to the PUBG Global Invitational in Berlin on July.

The PUBG Southeast Asia Championship qualifiers will officially kick off on April 28, 2018 and is open to all PUBG squads who are willing to accept the challenge of becoming SEA’s top PUBG squad.