Ramen No.1 in Japan - Hakata Ikkousha 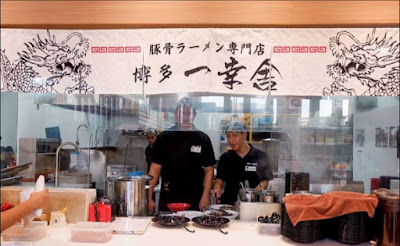 Ramen is a Japanese dish. It consists of Chinese-style wheat noodles served in a meat or (occasionally) fish-based broth, often flavored with soy sauce or miso, and uses toppings such as sliced pork. That's how the ramen was defined over the internet but you can also give your own definition from the Japanese restaurants or Ramen Restaurants that you've dined into.

In my case, I can say that this is one of the best ramens I've tasted so far and I'm referring to their best seller the Special Tonkotsu Ramen. I can't believe how much I can't resist to eat it in spite the fact that I thought I was already full from a previous event where I ate pasta, several artisan bread and bottles of beer which I did not count. The broth was really tasty and I get to smell and savour the meaty taste. I like this kind of ramen for another fact that I'm carnivore so having tons of veggies in my ramen isn't really that appealing to me, unlike other people.


Gyoza was awesome as well and so is the Japanese Fried Chicken. Gyoza was pretty much at par with all the other gyoza that I've tasted from other Japanese restaurants and hotels but this time both the chicken and gyoza really complimented my ramen and geez I just can't get enough, I wish I brought more appetite at that time.