Advocating Education for the Filipino Youth, One Diploma at a Time

For Filipinos, education is considered as a symbol of wealth that parents can bequeath to their children. As such, every family, as well as the government and civic organizations, are actively doing their best to make this precious wealth accessible to everyone, regardless of their status in life.

Through the Free Tertiary Education Bill, government programs, and our State Universities and Colleges, the government strives to make attaining a college degree possible.  However, there is still so much to be done. A recent survey conducted by the Philippine Statistics Authority (PSA) revealed that one in every 10 Filipinos, aged 6 to 24 years old, is out of school due to the high costs that go with the pursuit of an academic career. The survey also showed that more than 50 percent of out of school youths belong to families whose income falls at the bottom 30 percent of the entire population, based on their per capita income.

To help in advocating education, Prestone, a known brand for trusted and quality auto care (Motor Oil, Brake Fluid, and Coolants) products, launched its Anak ng Mekaniko Scholarship Program as part of its 90th Anniversary celebration.  It is a grant that aims to pay tribute to the country’s auto mechanics in the automotive sector by giving their children a chance to earn a tertiary level education.

Monique Gonzales, Brand Manager of Prestone, said that they owe a lot of their success to the auto mechanics, who continuously trust and patronize their products in ensuring vehicles are in good condition all the time.

“It is our time now to give back through this initiative and provide a ground for a brighter future for their children through education,” added Gonzales.

After receiving applications from across the country, Prestone is set to announce the nine deserving ANAK NG MEKANIKO Scholars, who will be granted a full scholarship to a four-year course of their choice in any STI Colleges campus nationwide. These recipients will be flying in Metro Manila early this May to personally receive their awards.

“Prestone is driving this project to help ease the burden that comes with having to pay for education, especially for low-income families. We want to make a positive impact in the lives of these students by helping them succeed through good and proper education”, said Gonzales. “In such a competitive world, getting a good job becomes increasingly hard and education can help pave the way for these nine deserving scholars to achieve their goals for their family.” 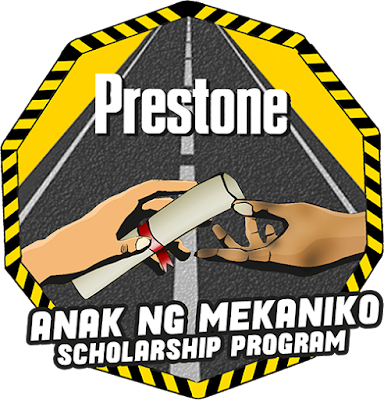 *This is Press Release
Posted by Boy Raket at 4:19 PM