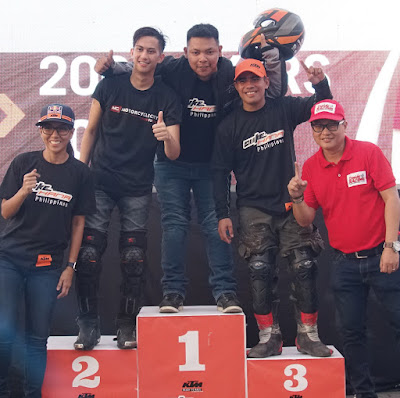 Luisito Sta. Ana once again added an award under his belt as he won recently as the first ever champion of the KTM Dukehana Luzon leg held at Circuit Makati parking grounds. KTM Dukehana is a motorcycle time trial sport where motorcycle riders compete to maneuver through a paved course restricted by traffic cones and other skill-testing obstacles in shortest time. There will be two more legs of the competition: one in April in Davao and another in June in Cebu. The Filipino champion will represent the country in the Dukehana Asia Finals where he will compete against other Asian competitors including Thailand, China and Taiwan. Photo shows (L-R) Marketing head of KTM Philippines Ana Lumban, second place winner Van Ruedas, Luzon leg overall champion Luisito Sta. Ana, third place winner Iraq Bauzon and Inside Racing’s Al Camba.
Posted by Boy Raket at 2:45 PM