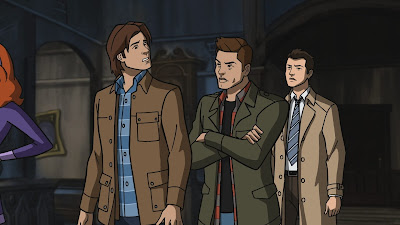 Two beloved worlds collide in the upcoming episode of Supernatural when Sam (Jared Padalecki), Dean (Jensen Ackles) and Castiel (Misha Collins) are transported into the animated world of Scooby-Doo where they join forces with the Scooby gang to solve a ghostly mystery.

The cast of Supernatural shared their excitement about the soon-to-be iconic episode during the recent Comic-Con.

“Everyone’s super excited about the Scooby-Doo episode,” said Jensen Ackles. “I don’t want to give away too much but there is a little live action at the beginning of the episode and that gets us into Scooby-land. I am pretty stoked about it. When we finished voicing the animation, we were like ‘Let’s do another one. That was awesome!’ We’d never been so eager to work before in our lives.”

“Doing the voiceover for Scooby-Doo was awesome. It was a real ‘pinch me’ moment. Frankly, it was one of the moments when I felt – Man, I love this show. It’s so cool that we get to crazy stuff. Embedded within a Supernatural episode, we will have an entire Scooby-Doo episode where our characters are animated. We’re thrust into the Scooby-Doo universe. It’s fantastic.” Misha Collins said. 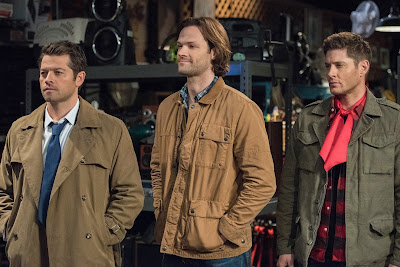 This highly-anticipated episode of Supernatural premieres on AXN 27 April, Friday at 10:40pm.

AXN is the leading English general entertainment channel in Asia with engaging content that redefines action. For the latest programming schedule at www.AXN-Asia.com or join the conversation on Facebook @AXNAsia.