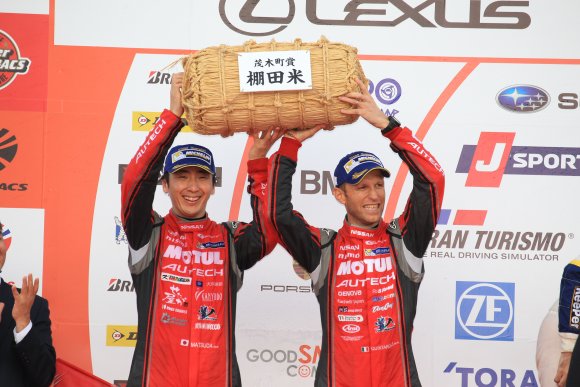 Prior to the start, the staff at NISMO and its partner Michelin Motorsport were tense and extremely focused on their mission since success in Super GT is as much a question of prestige as it is an indication of technical supremacy. It is this that drives the Japanese makes and the four world class tyre brands which are active in the championship to dedicate such significant technological resources to the series.

Despite facing competition from three local tyre makers, Michelin has risen to the challenge in style in recent years to claim three of the past four titles, including the 2014 crown with NISMO and Quintarelli/Matsuda.

The track was wet and the weather overcast for the start of this year’s Motegi GT 250Km Race but brighter sky was visible on the horizon and the local forecasters predicted sunshine before the chequered flag. As a result, the crews faced a mixed bag of conditions, making tyre versatility a potentially crucial factor which boosted Michelin’s hopes of a strong result.

Ronnie Quintarelli was nominated to line up on the grid in the N°1 GT-R and a good getaway saw him gain a place immediately. His speed then saw him carve his way up the order to figure in sixth spot – just 13 seconds behind the N°12 car – by the end of Lap 13.

Pascal Couasnon, Director, Michelin Motorsport: “We are very pleased to have won another title in what is such a fiercely competitive series. The technologies Michelin develops for Super GT keep pushing back the envelope in areas like performance, warm-up and consistency.

“That said, our rivals make progress every year and have taken some big steps forward. As a result, our development team is forced to innovate and that’s what makes Super GT such an extraordinary laboratory for us.

“Last but not least, I would like to underline the fervour of the huge crowds that attend all the rounds of the Super GT championship. It is consequently an excellent means of communicating for Michelin which is delighted to showcase the quality of its tyres in a nation of real motor racing fans and where the firm is seeking to gain market share.”

Ronnie Quintarelli: “This was the hardest championship to win. We had no margin for error. In certain situations, we were even perhaps a little behind, as we saw in qualifying. In the race, however, we succeeded in making the very most of our Michelin tyres. Pascal Couasnon was at the race, too, so it’s really nice to have won, especially given the tragedy that struck France two days ago.
Posted by Boy Raket at 6:15 PM