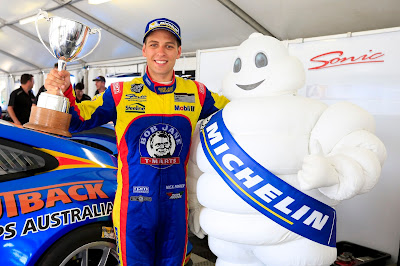 After what he described as the worst possible start to the season, Nick Foster never gave up and last weekend claimed the ultimate reward.

Failing to score even a single point in the first four races of the season, the challenge ahead of Nick was huge. The speed was always there, and thanks in part to the knowledge that his tyres would not let him down, Foster was able to push hard in every race.

“To win the Championship is by far the best moment of my career so far – it hardly seems real at the moment! Even though the start of the year was tough, I never gave up because I knew we had the package to get the job done,” said Foster.

“Having the confidence to push hard each and every lap was really important, especially this season. With Michelin tyres we know this is possible. There have been times this season when we have taken the tyres off at the end of the round, and there is still plenty of life left. We can’t ask for more than that!”

For Michelin, the Porsche Carrera Cup is an exceptional challenge, with the race track acting as the ultimate proving ground.

The long lasting, high performance of the Michelin N2 tyre that the Porsche Carrera Cup Australia uses has been on display all year. The performance has resulted in quick lap times, and even new lap records, being set right up until the closing stages of the final race of the weekend.

“We have seen some of the best racing in Australia in Carrera Cup this year with the drivers able to push their tyres for the whole weekend – this is why we go racing,” said Michelin Australia Marketing Manager, Tim Hoare.

“Globally, the Porsche motorsport platform allows us to innovate and deliver performance – that is why we partner with them. Our engineers work with the Porsche engineers to deliver exactly what the Porsche drivers demand: speed, safety, longevity, and driving pleasure, without compromise.”

For Michelin, this partnership extends off the track and well.

“Michelin works with Porsche's design teams from the bottom up, engineering tyres that react perfectly with the chassis, not just with their race cars but also with their road cars,” explained Mr Hoare.

The philosophy of “MICHELIN Total Performance” is at the heart of Michelin's research and development strategy globally and is applied to the development of all Michelin tyres. It reconciles qualities that some believe to be conflicting by virtue of technology such as grip and long lasting tyres.

*This is a Press Release
Posted by Boy Raket at 9:00 PM