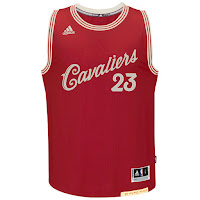 Designed as part of the adidas NBA Season’s Greetings Collection, the uniforms incorporate primary team colors and cream tones with player names and numbers showcased in holiday-style script and detailed with woven rows of stitching.  Displayed on the back of the jersey is a scarlet NBA seal taking inspiration from holiday greeting cards.

Filipinos will get the chance to purchase the limited edition Christmas jerseys of Kobe Bryant, Stephen Curry, LeBron James, Damian Lillard, Derrick Rose, and John Wall.  Fans can also gear up for the holidays by checking out the NBA Store’s comprehensive range of authentic products from all 30 teams that includes footwear, performance gear, lifestyle apparel, basketballs, toys and collectibles. 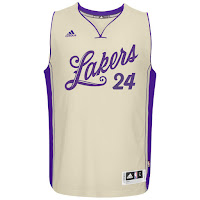 About NBA
The NBA is a global sports and media business built around three professional sports leagues: the National Basketball Association, the Women’s National Basketball Association, and the NBA Development League.  The league has established a major international presence with offices in 13 markets worldwide, games and programming in 215 countries and territories in 47 languages, and NBA merchandise for sale in more than 125,000 stores in 100 countries on 6 continents.  NBA rosters at the start of the 2014-15 season featured a record 101 international players from 37 countries and territories.  NBA Digital’s assets include NBA.com and NBA Mobile, which achieved record traffic during the 2014-15 season, as well as NBA TV.  The NBA is the No. 1 professional sports league on social media, with more than 875 million likes and followers globally across all league, team, and player platforms.  Through NBA Cares, the league addresses important social issues by working with internationally recognized youth-serving organizations that support education, youth and family development, and health-related causes.

About International Athletic Trading Company Inc.
International Athletic Trading Company, Inc., (IATC, Inc.) is a joint venture partnership between Ever Fit Holding Company, Inc. and IP Ventures, Inc. Ever Fit Holding Company, Inc. is engaged in retail and wholesale of apparel. Its stakeholders have more than 25 years of experience in retail operations in major malls located in the Philippines. It has 65 retail stores with an average selling floor area of 100 square meters. Over the past five years, it has managed to grow its business at an annual compound growth rate of 6%. The basic strength of its management lies in being able to immediately identify changing market trends and adopt strategies proactively. IP Ventures Inc. is a well-known venture & private equity group in the Philippines with investments in retail, gaming, technology, media and telecommunication. Considered as one of the pioneers of the Internet industry, IP Ventures listed the first online gaming company and first internet data center company in the country. IP Ventures also owns Netopia with over 60 outlets located in high traffic malls representing over 6,000 square meter of retail space. IP Ventures maintains a joint-venture with Philstar.com to run and operate NBA.com Philippines and has exclusive distribution rights for NBA 2K games. IP Ventures is also launching NBA 2K Online in the Philippines in 2015.