Sparta Presents the First Ever Battle of the Bars Calisthenics Competition 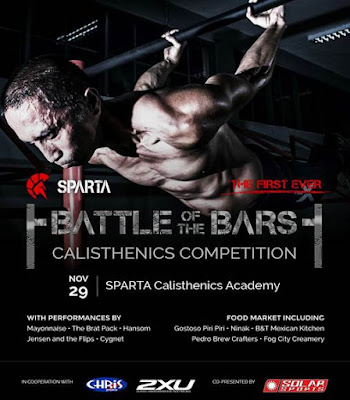 SPARTA, Sports and Recreational Training Arena, recently opened the first and only calisthenics academy in the country. It is proud to present the first ever Sparta Battle of the Bars Calisthenics Competition.

Calisthenics, which is slowing making waves in Asia, uses body weight movements and has benefits which include increasing strength, creativity, balance, power, endurance, and of course, aesthetics.

Sparta has been at the forefront of this movement in the Philippines.  After opening the first indoor calisthenics academy this month, it will now put to test the strength and endurance of the best calisthenics practitioners in the country on November 29, 2015 for the Sparta Battle of the Bars.

According to Sparta Calisthenics Academy’s consultant and designer Ton Vergel de Dios, “Calisthenics or training with body weight exercises is not only fun and challenging but also beneficial to strength, and in achieving that Spartan 3D abs look.”

“What sets calisthenics apart from the usual weight training is that, one gets to master moving the body through space and is able to use body weight exercises as opposed to external weight to gain strength.  One is also able to work on the smaller muscles, which gives calisthenics practitioners that 'ripped' look.”

Vergel de Dios added, “We put up the academy because with all the different scientific approaches to fitness, it was obvious that simple progressions (provided by calisthenics) could give most people the results they wanted.  With Sparta Battle of the Bars, we can expect to catch a glimpse of the calisthenics and street workout lifestyle which is quickly making its way into the limelight here in the Philippines. Hopefully this will inspire more people to try calisthenics and train like Spartans.”

Registration for the event starts at 12:30 p.m. on November 29.  There will also be a Food Market curated by Jj Yulo at 4 p.m.  Bands such as Mayonnaise, The Brat Pack, Hansom, Jensen and the Flips and Cygnet will also be performing at 6 p.m.

Registration fee is at P100 for one-on-one reps and P200 for tricks tournament.  Event is free for all non-participants.

SPARTA is a one-stop sports, lifestyle and wellness center built for the highly competitive athlete.  It is destined to become the most influential sports facility in the Philippines through its centralised location, expert trainers and programs developed for those who aim to dominate the competition.