A One-Two in China, plus the 2015 WEC Manufacturers’ title for Porsche and Michelin After a Race of Two Halves 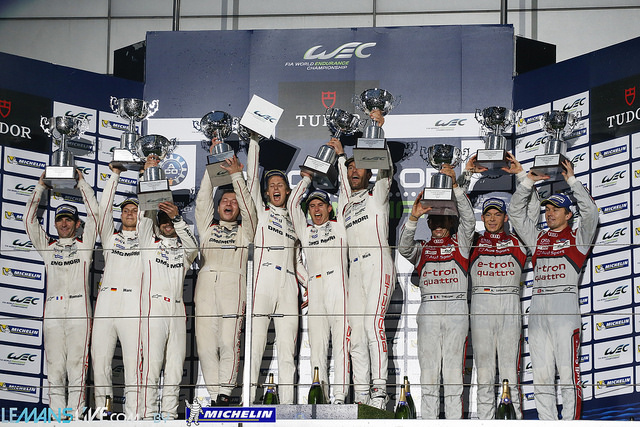 Sunday’s race was essentially divided into two distinct parts, with the first three hours effected by heavy rain which prompted Race Control to kick off the action behind the Safety Car for the first five laps.

When the Safety Car peeled off after round 10 minutes, the real competition got underway as the cars threw up plumes of water, with their Michelin rain tyres capable of clearing up to 120 every second.

In LM P1, the Audi R18 e-tron quattros immediately challenged the Porsche 919 Hybrids which were running first and second, and the early battle also involved the Toyota’s two TS040 Hybrids which tried to make life as hard as possible for the two German makes. It was during this phase of the race that the N°18 Porsche (Dumas/Jani/Lieb) span after a tangle with the N°7 Audi (Fässler/Lotterer/Tréluyer).

At this stage, the two Audis focused on chasing the N°17 Porsche (Bernhard/Webber/Hartley) as closely as possible in order to prevent Brendon Hartley from pulling out too big a gap, but the Toyotas started to lose ground.

By the two-and-a-half hour mark, the N°18 Porsche had fought back to join the fight between the Audis and its N°17 sister car. After the third round of refuelling stops, the N°7 Audi – the drivers of which can still win the 2015 Drivers’ crown – and the similar N°8 car (Di Grassi/Duval/Jarvis) succeeded in appearing in front, with the two Porsches around five seconds back.

It was around this time that the rain started to ease off and eventually stop, meaning there was less and less water on the track. That’s when Porsche chose to double stint on rain tyres, a strategy that saw the team’s two cars recover the lead before steadily extending their cushion as the track dried out more or less completely over the final three hours.

Meanwhile, victory for Bernhard/Webber/Hartley has put the crew of the N°17 Porsche in a strong position for the 2015 Drivers’ title, ahead of Fässler/Lotterer/Tréluyer (N°7 Audi) who were third in China.