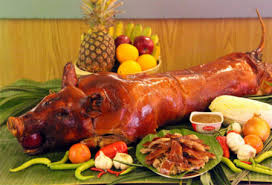 Calata Corporation, one of the biggest agribusiness conglomerates in the country, is mounting a grand “Lechon Party” for the less privileged residents of Metro Manila in its bid to break the record for largest serving of roast pork. The Lechon Party is set to happen on November 8, 2015, 4:00 pm at the Liwasang Aurora, Quezon City Memorial Circle, Quezon City, in celebration of Calata Corporation’s 16th anniversary, and as an early Christmas gift to the less fortunate residents of the Metro.  More than just a celebratory feast, the event also aims to make history by hitting a Guinness World Record on the largest serving of roast pork. Currently, Mexico holds this record where they served 3,094.2 kilos of cochinita pibil, a popular roast pork dish in Yucatan region in 2010.  Calata Corporation will try to top the record by serving 5,000 kilos of the country’s well-loved version of roast pork – the lechon.

“This year, we will celebrate our 16 successful years in the business by giving back to the community instead of having a lavish party. We also hope to make a momentous occasion for the Philippines by aspiring to break the Guinness World Record for the ‘Largest serving of lechon’,” shares Joseph Calata, Chairman and CEO of Calata Corporation.

Calata Corporation is the largest retailer and distributor of top agrochemical brands, feeds, fertilizers, veterinary medicines and seeds throughout the country. Calata Corporation also owns and operates a chain of retail stores named AGRI, the largest retailer of the country’s choice brands such as AGRI Crop Protection, Heisenberg veterinary medicines, Thomson and Hine, as well as Ivansmith agrochemicals. Calata Corporation’s “Lechon Party” reflects how much the company values achievement, success, gratitude and kinship.  Indeed, it’s a great way to kick off the holiday season by sharing their blessings with the less privileged and gathering family and friends.