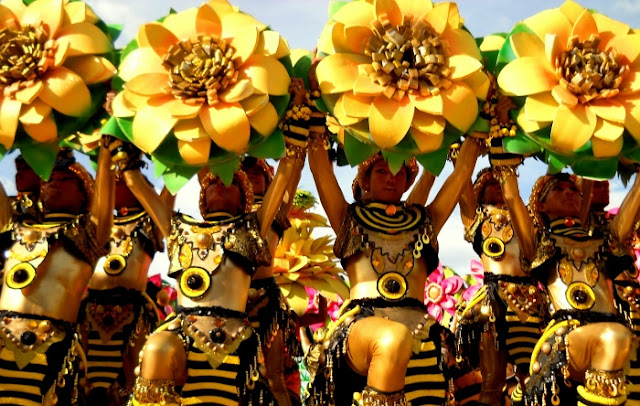 Over a hundred cultural performers from the multi-award Buyogan Festival from Leyte have been invited to perform at the upcoming World Culture Festival. The World Culture Festival is the largest gathering the world has ever seen, attracting millions from different cultures, nations and faiths uniting under the resounding message of One World Family. The group’s attendance will mark the first time that a representative from the Philippines will grace the global event which will be held on March 11-13, 2016 in New Delhi, India.
The Buyogan Festival is a group of cultural performers from Leyte, which was critically impacted by Typhoon Yolanda three years ago. They have won several championships at the Sinulog Festival and are proud to represent the nation in this historic event.
They have choreographed a special performance which is a tribute to the world for their help after Typhoon Hayien and also showing the resilience of the Filipinos moving from devastation to rehabilitation and to celebration.
The WCF is part of the 35th anniversary celebration of The Art of Living, a global movement founded by Sri Sri Ravi Shankar.
Speaking on this grand celebration, World Culture Festival 2016, The Art of Living founder, Sri Sri Ravi Shankar said, "We are a part of one humanity and we express ourselves differently through music, art and food. Celebrating our diverse cultures binds us together and expands our perspectives. The World Culture Festival emphasizes on co-existence, demonstrating the power of peace by bringing millions of people together. It is an opportunity for world leaders from cultural, social, political, business fields to come together to rekindle human values in the pursuit of happiness and peace."
​​The Art of Living is looking for generous benefactors and sponsors who would like to contribute and make the dream of the award-winning Buyogan Festival cultural performers to travel to India a reality.

The Buyogan Festival is a fiesta that is celebrated in the coastal town of Abuyong in Leyte, where the local buyog or bees take the spotlight as vibrant bee dancers perform during a grand parade. No doubt, it would be a shining moment for Tacloban—an area that has been reeling from challenges in the aftermath of Typhoon Yolanda—its people, and our nation as we showcase the best of the Philippines to the world.
‘World Culture Festival' (WCF) is expected to host millions of people from over 155 countries in New Delhi. The event is supported by the Ministry of Culture, the Ministry of Tourism and the Government of India.
The 3-day grand festival will have a massive 7-acre stage to seat thousands of artists, dignitaries and guests as they witness the staging of a most impressive variety of music, dances and other art forms from India and across the globe, with the vision of preserving them for future generations. On all three days of the festival, Sri Sri Ravi Shankar will lead a ‘Peace Meditation’ which would be joined by millions from across the globe.
Individuals and organizations who wish to know more on how they can support may call Kim Hartman at 0917 8480063. More info can be found at The Art of Living Philppines Facebook page, #wcf2016 #worldculturefestival. Help fund the initiative online at www.tinyurl.com/BuyoganToWCF. Learn more about the Art of Living at: www.artofliving.org or call 0917-840-0049  (02) 622-2566 for inquiries.
Several graduates of the Art of Living programs as well as those who are simply interested to be part of a Global Peace effort are also making plans to represent the Philippines and attend this historic event. Filipinos who have been keen to visit India may also see this as a great opportunity. The Art of Living Foundation can help with tour packages and travel arrangements.


About The Art of Living:
The Art of Living Foundation, founded by Sri Sri Ravi Shankar in 1981, is a global movement, rekindling human values in the pursuit of happiness and peace. It works to bring peace at the level of the individual, society, nation and the world as a whole. Its areas of work cover conflict resolution, disaster and trauma relief, poverty alleviation, empowerment of women, prisoner rehabilitation, education for all, campaigns against female foeticide and environment sustainability. Sri Sri Ravi Shankar is a universally revered spiritual and humanitarian leader. His vision of a violence-free, stress-free society through the reawakening of human values has inspired millions to broaden their spheres of responsibility and work towards the betterment of the world.

Sri Sri Ravi Shankar is engaged in peace negotiations and counselling in conflict zones around the world. His peace initiatives in Sri Lanka, Iraq, the Ivory Coast, Cameroon, Kashmir and Bihar have been widely acknowledged.  Present in 155​ countries, The Art of Living formulates and implements lasting solutions to conflicts and issues faced by individuals, communities and nations.  Sri Sri Ravi Shankar has reached out to an estimated 370 million people worldwide through personal interactions, public events, teachings, Art of Living workshops and humanitarian initiatives.
Learn more about this amazing event at www.worldculturefestival.com or call Kim Hartman at 0917 8480063 or 0917 8105990 for more info on how to join the Philippine delegation traveling to India.