The NBA has unveiled hashtag-triggered Twitter emojis for all 24 NBA All-Stars.  The #NBAAllStarTO emojis, revealed on Twitter by entering #firstnamelastname (i.e. #stephencurry, #lebronjames), are now live through Monday, Feb. 15.

For the first time, the Kia NBA All-Star MVP Award fan vote will be conducted exclusively through Twitter.  Beginning at the start of the fourth quarter of Sunday’s NBA All-Star Game on TNT, fans can register MVP votes during a 30-minute window by tweeting #KiaAllStarMVP and #firstnamelastname in the same tweet.

Announced tonight on TNT, emojis have also been created for the Turner Sports’ Emmy Award-winning Inside the NBA studio team and game broadcast team for use during NBA All-Star 2016 in Toronto.  With the lone exception of #shaq, the Turner Sports emojis are also revealed by entering #firstnamelastname. 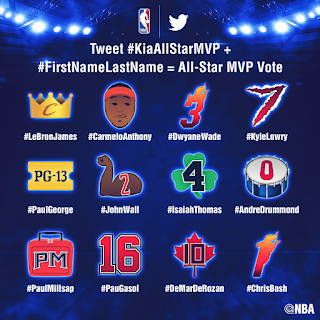 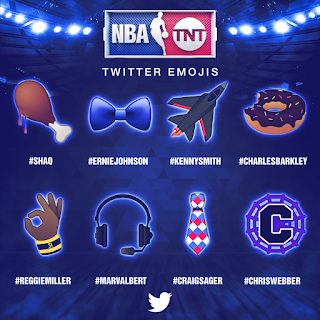 For the fan vote, retweets will count up to 100 times and the fan vote winner will account for 25 percent of the overall vote.  For full voting details, visit www.nba.com/aswtc/.

The league will also be working with Twitter and Vine to bring back “KicksCam” after debuting it at NBA All-Star 2015 in New York City.  @NBA will tweet out Vines of the players’ sneakers just before they step on the court each night of NBA All-Star 2016.  To embrace its global social media fanbase, the NBA was the first professional sports league to include its social media handle on its official game ball when it added the @NBA handle prior to the 2014-15 season.

*This is Press Release
Posted by Boy Raket at 7:12 AM