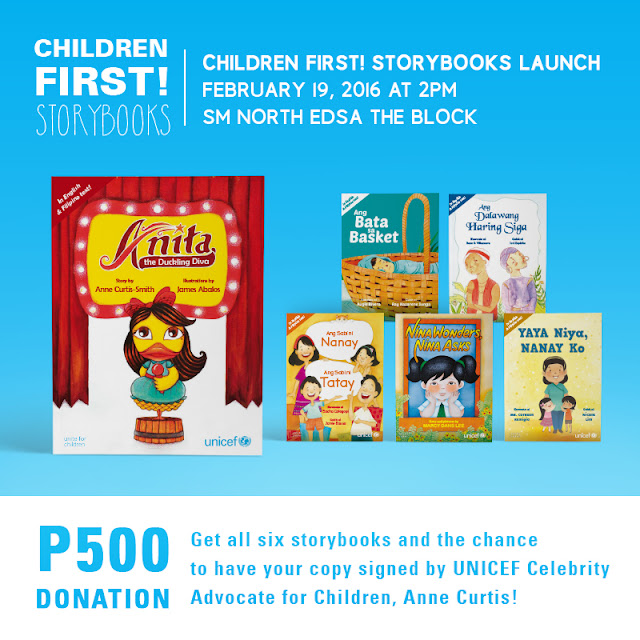 Just when one thinks she has done it all, multi-talented actress and UNICEF Celebrity Advocate for Children Anne Curtis is making another mark in her illustrious career – this time, as a children’s book author for the United Nations Children’s Fund (UNICEF). On February 19, Anne will be signing her book entitled “Anita, the Duckling Diva” at SM North EDSA The Block during the Children First! Storybooks launch.

Anne’s fondness for children has been evident among her followers and fans. As an advocate of UNICEF, she is lending her lesser known talent as a writer to help the organization raise funds for its various programs for less privileged children in the Philippines. These include programs on education; health and nutrition; water, sanitation, and hygiene; child protection, and disaster risk and reduction and emergencies.

From February 19 to 25, an exhibit will be showcasing original artworks from UNICEF’s books. These artworks are created by members of Ang Ilustrador ng Kabataan (INK), which is the first and only organization of Filipino illustrators for children.

The public will also be given a chance to contribute to the organization’s programs for children throughout the weeklong exhibit. Anne will likewise read to children in the venue along with other featured storytellers on the day of the UNICEF Children First! Storybooks launch.

The event is being made possible by a partnership between UNICEF and SM Cares. A corporate social responsibility arm of SM Supermalls, SM Cares maintains various programs that focus on children’s and women’s welfare, elderly care, PWD inclusion, and other endeavors that makes the mall a “mall for all”. The two organizations have been partners since 2008.