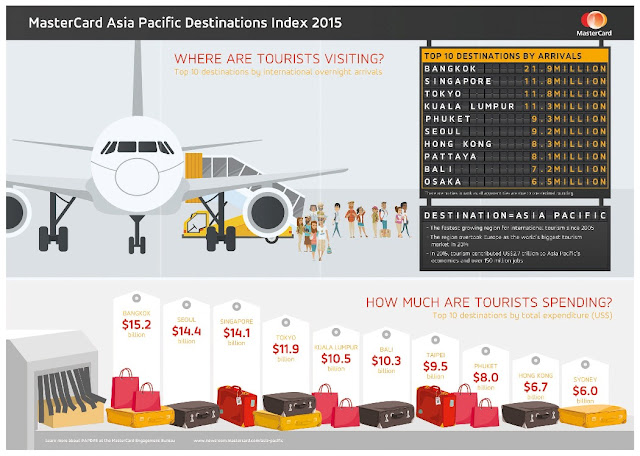 Bangkok has increased its lead over the pack as the region’s most popular destination, with international overnight visitors breaking the 20 million mark for the first time, according to the results of the inaugural MasterCard Asia Pacific Destinations Index.  Second place was a close fight between Singapore and Tokyo.

The inaugural index provides a ranking of 167 destinations across Asia Pacific. Thailand dominated the top ten destinations, taking three of the top ten rankings, with Phuket securing fifth place (9.3 million) and the coastal city of Pattaya coming in at eighth place (8.1 million).

Asia Pacific’s tourism industry is the largest in the world by total contribution to GDP, having overtaken Europe in 2014. Tourism contributed US$2.27 trillion to Asia Pacific economies and 153.7 million jobs in 2015.

Matthew Driver, Group Executive, Global Products & Solutions, Asia Pacific, MasterCard, commented, “The tourism industry in Asia Pacific is continuing to show robust growth with an increasing number of destinations receiving well over five million visitors a year, driven by increased consumer wealth, particularly from China. Our Asia Pacific Destinations Index (APDI) 2015 reveals the continued resilience of the Thailand market for tourism led by a resurgent Bangkok, as well as the return to popularity of Japan for visitors as demonstrated by the more than 50 percent growth year on year in its top four destinations. Providing in-depth analysis of overnight arrivals in 167 Asia Pacific destinations, the APDI can help businesses and governments better understand the underlying components of in-bound tourism demand, so they can plan investment to ensure the sustainable development of the tourism industry. This is becoming increasingly important as tourist numbers continue to rise, as at current growth rates, Asia Pacific will have more than 500 million tourist arrivals by 2020.”