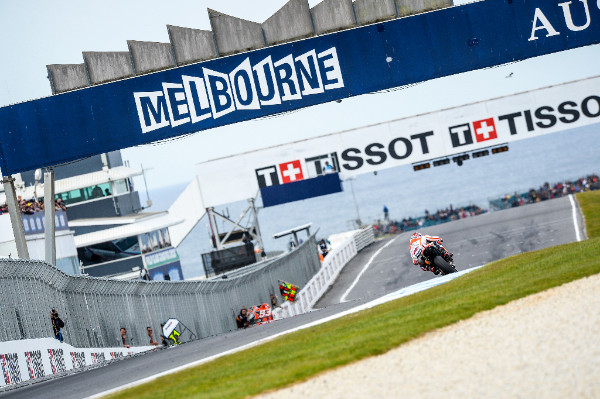 Having become the official FIM MotoGP™ World Championship tyre supplier in 2016, Michelin extend their involvement in the MotoGP™ category as they become the title sponsor of the Australian GP.

The Michelin Australian Motorcycle Grand Prix will take place on the 23rd of October and is always a fan favourite. The Phillip Island circuit was first part of the Grand Prix calendar in 1989 and has produced some of the most incredible races in recent decades. 2015 produced a particularly unforgettable battle as four riders swapped positions for the win.

Bibendum, the Michelin Man, will of course be in attendance at the Michelin Australian Motorcycle Grand Prix with further signage throughout the circuit. This agreement further emphasises the dedication of Michelin to the MotoGP™ championship, the Australian GP one of the most popular races amongst fans and riders.

The Phillip Island circuit will push the new Michelin tyres to their limits as MotoGP™ riders race down the Gardner Straight and into Doohan Corner with speeds reaching almost 350 km/h down the straight. With extensive testing having already been performed there is little doubt the French built tyres will once again help to producing jaw dropping action.

Gary Guthrie, Michelin President 2-wheel tyre division declared: "Michelin is back in MotoGP this year to take up a new technological challenge that will help us to enhance the performance of our road tyres of tomorrow in line with our ‘track to street’ policy. Michelin is currently expanding in all its Asian/Pacific markets where motorcycling is often the most common form of private transport. The opportunity DORNA has given us to associate Michelin with the Australian GP, which is one of the MotoGP rounds that bikers from all over the planet invariably look forward to the most eagerly, is a tremendous lever for us. It will enable us to reinforce the bond and engagement that exists between the Michelin brand and bikers right across this part of the world.

Pau Serracanta, Managing Director, Commercial Area at Dorna Sports, added: “To come as the title sponsor of a Grand Prix as iconic as the Australian GP demonstrates the true dedication that Michelin have to the FIM MotoGP World Championship. We have had great races around Phillip Island for almost three decades and thanks to Michelin tyres this looks set to continue. Tyres are one of the most critical parts of a motorcycle and we are pleased to help Michelin develop their tyres for the road with the research and data they gather via MotoGP.”