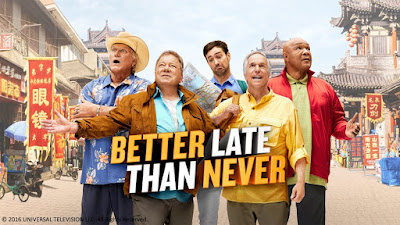 The adventure of a lifetime for four celebrated men from across different genres kicks off in Tokyo on Sunday, April 2 with the premiere of the addictive new series “Better Late Than Never.” This fish-out-water travelogue series follows cultural icons Henry Winkler, William Shatner, Terry Bradshaw and George Foreman as they traverse Asia exploring different countries and cultures.
With no schedule and no itinerary, the only help will come from comic sidekick Jeff Dye, a young tech-savvy comedian with an agenda of his own and who isn’t above leading the men off track.
Navigating their way through six cities and four countries, the five men make connections with the local population, immerse themselves in local traditions and sample exotic food -- all the while dealing with the unexpected twists and frequently hilarious turns that any trip presents.  Checking off items on their own personal ‘bucket list,’ the men will also reveal different sides to their personalities as they support one another and find themselves bonding in surprising and meaningful ways.
“We had to build a relationship quickly for the show and when you put five total strangers together, you just don’t know how it is going to be received,” said Terry Bradshaw, four-time Super Bowl champion for the Pittsburgh Steelers. “We had a blast, an absolute blast and I've got all of these new friends.”
The five of men will travel to iconic cities across Asia starting in Tokyo, Japan where they are immediately out of their element and can’t even find their way out of the train station. Other cities include Kyoto, Hong Kong, Seoul, Phuket and Chiang Mai. Each stop is packed with hilarious cultural experiences, heartwarming spectacles and unexpected twists as the legends take on this unforgettable adventure.
The eclectic group of travellers include:

*This is Press Release
Posted by Boy Raket at 7:15 AM