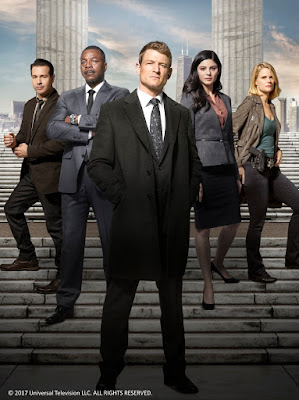 A new breed of legal heroes are on the rise to uphold the law at all times in the brand new legal drama, Chicago Justice, which premieres this March on Sony Channel.
This fourth installment from executive producer Dick Wolf’s Chicago franchise stars Carl Weathers (Rocky) as State Attorney Mark Jefferies, Philip Winchester (Strike Back) as Assistant State Attorney Peter Stone, Jon Seda (Chicago P.D.) as Chief Investigator Antonio Dawson, Monica Barbaro (UnReal) as Assistant State Attorney Anna Valdez, and Joelle Carter (Justified) as Investigator Laura Nagel.
Together at the Cook County State Attorney’s Office, this dedicated team of prosecutors and investigators engage in heated arguments in their fearless pursuit of justice as they handle high profile and sensational cases while trying to find the balance between politics, power struggles, and public opinion.
Armed with their unwavering passion for the law, they must face one controversy to the next, proving their point in every case, as they hurdle through the legal system and eventually become a part of Chicago’s finest.

Chicago Justice premieres on March 8, every Wednesday at 8:50pm with a double-episode premiere same week as the U.S. telecast.