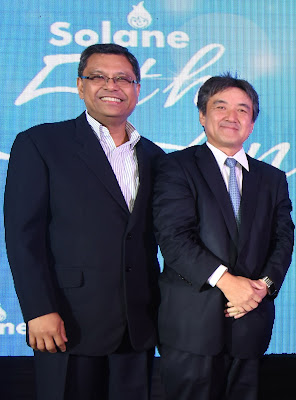 This was the celebratory pronouncement of Ricky Delgado, Jr., chairman of the executive committee, as he summed up the last five years of ISLA LPG Inc. (ILC), the company behind leading LPG brand Solane, when it recently celebrated its fifth year as the country’s leading liquefied petroleum gas solutions company.

“Solane has only been running for five years but we’ve already done so much. This company is respected for what it does well, and I think that if you look at how far we have come, it’s really because of the same strategy we have kept from the start – reliable, safe, and we take what we say seriously,”  said Delgado.
Taking part in the momentous occasion were  top executives led by Ruben Domingo, ILC chief executive officer (CEO), Shoichi Watanabe, ISLA Petroleum and Gas (IPG) CEO, Willie Sarmiento, IPG chief finance officer, and Tonito Gonzalez, ILC general manager for sales. Also present were Bobby Kanapi, IPG board member, and executives of ITOCHU – one of the company’s shareholders – including Yuji Fukuda, ITOCHU senior managing executive officer, and Keisuke Oba, ITOCHU Manila general manager

Awards were also given to the employees who have been part of this milestone. The Team ACE Awards were given to the Bulk and Commercial Team consisting of Marvin Castor, Kaiza Yu, Miguel Estrada, Raph Carbonell, John Cort, Rey Enriquez and headed by Elma Revillame for exceeding the sales target compared to the previous year. The Account Manager of the Year was awarded to Haidee Alverne of the Vismin Team. Further, the Eagle Awards were given to Gigi Indangan, third place, Regie Reyes, second place, and Ricky Estolas, Jr., first place, for their outstanding performances as ILC operations staff.


To know more about Solane, visit their new website, www.solane.com.ph, and Facebook page, www.facebook.com/solane.ph.
Posted by Boy Raket at 1:48 PM