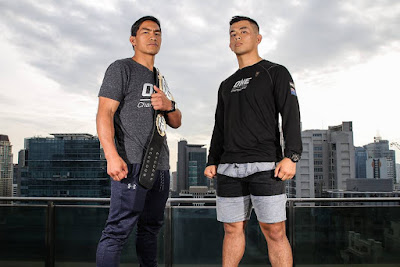 The largest sports media property in Asian history, ONE Championship™ (ONE), in conjunction with Predator gaming laptops, recently held an Exclusive Media Day for ONE: KINGS OF DESTINY, featuring main event combatants ONE Lightweight World Champion Eduard “Landslide” Folayang of Baguio City, Philippines, and challenger Ev “E.T.” Ting of Kuala Lumpur, Malaysia. The two fighters faced off in front of the media at the Top of the Citi Restaurant in Citibank Tower on Tuesday, 28 March, in Manila.

Eduard Folayang, ONE Lightweight World Champion, stated: “I always consider every fight a tough one because every fighter goes into the cage with the intent to give more than a hundred per cent of themselves. Every fighter prepares very well at this level and they all have their own uniqueness and strategy. It all depends on how our styles will match up. Keeping the title is what I plan to do. This title means a lot to me, and I can’t just let it go easily.”

Ev Ting, ONE world title challenger, stated: “Eduard displayed the best version of himself in the Shinya (Aoki) fight when he won the title. He displayed a lot of patience, he exploded at the right times, and put pressure on at the right times, so he showed a very top-caliber Eduard Folayang, and I expect nothing less in April. His wrestling is solid, his timing is obviously one of his strongest strengths, and he defended everything from Shinya despite strong positioning, so yeah, I have a hard task ahead of me.”

Eduard “Landslide” Folayang of the legendary Team Lakay in Baguio City is one of the Philippines’ most experienced mixed martial artists. After nearly a decade of competing in various promotions, Folayang has amassed an impressive 17-5 professional MMA record. The 33-year-old veteran authored a career resurgence in 2016, winning three consecutive bouts against high-profile opponents while showcasing a highly-improved wrestling and grappling arsenal. In his last bout, Folayang shocked the world by capturing the ONE Lightweight World Championship with a sensational victory over Japanese MMA legend Shinya Aoki. Folayang will now put his title on the line against Ev Ting.

Ev “E.T.” Ting is a mixed martial artist with deep roots in Kuala Lumpur, Malaysia. Living and training out of Auckland, New Zealand, Ting owns a stellar 13-3 professional record, including four wins by submission and four exciting knockouts. A winner of his last four bouts over top-caliber opponents, Ting is one of the most talented mixed martial artists to come out of Malaysia. In his most recent bout last February, Ting overcame a tough challenge from MMA veteran Kamal Shalorus to win by split decision. The victory earned him a date with ONE Lightweight World Champion Eduard Folayang in Manila.

About ONE Championship™
ONE Championship is the largest sports media property in Asian history. Headquartered in Singapore, the world’s most exciting mixed martial arts organization hosts the largest sports entertainment events across Asia featuring the best Asian mixed martial artists and world champions, all signed to exclusive contracts, on the largest media broadcast in Asia. ONE Championship is broadcast to over 1 billion viewers across 118+ countries around the world with some of the largest global broadcasters, including FOX Sports, Setanta, MNC, Astro, Thairath TV, ABS-CBN, TV5, MYTV, HTV, OSN and more.
Posted by Boy Raket at 10:20 PM