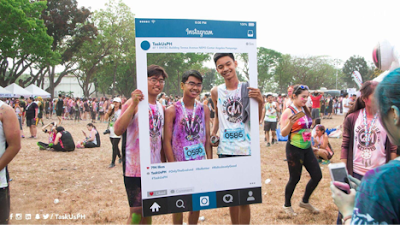 TaskUs, headquartered in Los Angeles, and best recognized by Inc. 500 as one of the 5000 Fastest Growing Companies in America, is rapidly expanding in the Philippines today.  It currently has 7,500 employees and five sites, and is best known as the “secret behind the phenomenal scaling of some of the world’s companies”, such as Twitter, Groupon, Tinder, Shopify and Whisper, among others.

Known as ridiculously good at powering tech startups; it has partnered with Color Manila, the country’s most aggressive ‘concept fun-run’ organizer, for its CM Challenge Run held last March 19, 2017, at Clark Parade Grounds in Pampanga.

The partnership makes perfect sense, “As a company that cares deeply about affecting people in meaningful and revolutionary ways, TaskUs finds a kindred spirit in Color Manila, as they find purpose in bringing color to people's lives. We genuinely care about our employees' overall well being, and this includes their physical and emotional health. Work-life balance is important, so a colourful fun run that defies norms and gives people the opportunity to not just explore an avenue for healthy recreation but also create connections with other human beings who enjoy the same things, is something that we definitely support”, says Rey Salazar Jr., Brand Director of TaskUs.

Thousands of runners trooped to Clark as early as 4 a.m., to participate in the race’s various finishes, such as 3K, 5K and 10K.  Runners also enjoyed taking selfies and were given limited edition goodies as they immersed with employees at the TaskUs branded color station inside Clark Parade Grounds.  TaskUs employees from the House Teamwork Nepo, Angeles site also took the opportunity to join the colorful and challenging event.

“TaskUs today is expanding rapidly and has transformed to something more than just a company.  It is a movement.  We change what it means to work in this industry; not by idly accepting the status quo, but by taking smart risks, and finding new ways to do things better”, adds Ma.Isabel Bernal, VP of Culture.

For more information about TaskUs, please visit www.taskus.com and facebook.com/taskusph
See a TaskUs site open in Batangas City this March 2017

A startup for startups, TaskUs is a place where #OnlytheEvolved come together to bridge the gap between those who want to #BeBetter by revolutionizing the ways the world works, and the ever-evolving technological landscape. We believe in combining exceptional individuals with promising technologies to create innovative and exciting opportunities and applications for any and all situations.

*This is Press Release
Posted by Boy Raket at 10:31 PM