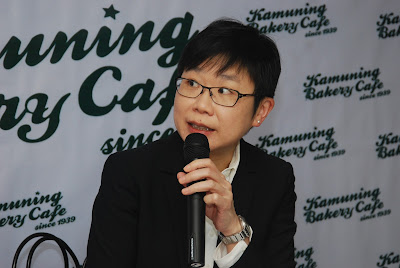 Singapore Ambassador Madame Kok Li Peng joined award-winning poets Jose F. Lacaba and Marra Pl. Lanot on March 21 morning to celebrate UNESCO’s “World Poetry Day” at the Pandesal Forum of 78-year-old Kamuning Bakery Café in Quezon City. The envoy also discussed Philippine-Singapore relations and Asean issues with the media and intellectuals at the two-hour forum. This artisanal café also gave away free coffee or tea drinks the whole day to all people who came to pay with their original poems, in a unique civic and cultural project.

To celebrate “World Poetry Day”, Kamuning Bakery Café’s Wilson Lee Flores invited Singapore Ambassador Kok to recite one of her favorite poems entitled “The road not taken” by Robert Frost. Lacaba and Lanot both also each recited their original poems in the Filipino language.

During the free-wheeling Pandesal Forum with local and international media, Ambassador Kok extolled the warm diplomatic and economic ties between the Philippines and Singapore, as well as the general optimism of the Asean region as it celebrates its 50th anniversary this year with a high-level summit hosted by chairman the Philippines. She said that there are high hopes on the RCEP economic agreement being worked out between the 10-member nations of Asean region and China, that she thinks both this RCEP and even the TPP are all good initiatives to promote freer global trade. 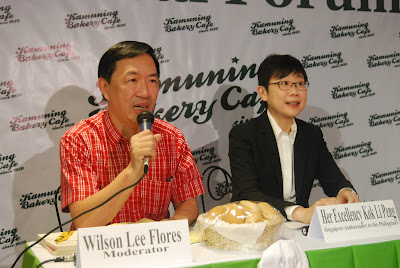 Ambassador Kok declined to comment to media’s questions on controversies like some Western criticisms of the draconian war on illegal drugs and the new death penalty bill, she reiterated that Singapore respects the sovereignty of its nation to govern itself and solve its own problems. She said Singapore has a very strong policy against illegal drugs. Kok also declined to comment on territorial dispute issues, since Singapore isn’t a claimant state but expressed hopes that Asian regional peace and stability shall be maintained by all Asian countries in order to sustain the region’s strong economic growth.

Kok also said that Singapore’s founding father the late Prime Minister Lee Kuan Yew and Philippine President Duterte live in different eras and face divergent challenges, but Ambassador Kok said that both Lee and Duterte are similar in their “strong political will and being doers”. She said during President Duterte’s state visit to Singapore, she had witnessed his “magnetic appeal”, charisma and humility in meeting with ordinary people at his short walk at a mall.

Ambassador Kok said that Singapore is optimistic about bilateral ties and the Philippines’ economic future, especially with strong economic growth and strong will to achieve national peace. She lauded government’s on-going peace negotiations with the Communist rebels and the Moro secessionist rebels.
Posted by Boy Raket at 11:18 PM