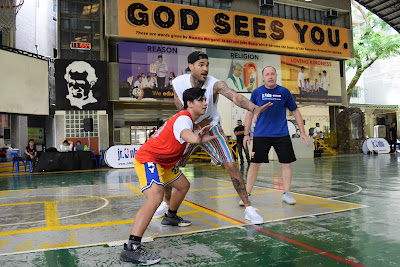 Sacramento Kings big man Willie Cauley-Stein, tries pesky defense on a Jr. NBA All-Star aspirant as part of the drills at the Jr. NBA National Training Camp as Alaska coach John Ramirez looks on. The league’s global youth basketball participation program for boys and girls that teaches fundamental skills and the core values of Sportsmanship, Teamwork, a positive Attitude and Respect, is now in the process of selecting the newest All-Stars of Jr. NBA Philippines 2018 presented by Alaska. WNBA Hall of Famer and 3-time MVP Sheryl Swoopes is also in Manila for the Jr. NBA Philippines program. The top eight boys and eight girls who will follow the footsteps of previous All-Stars like Kobe Paras, Ricci Rivero, Kiefer and Thirdy Ravena, Kib Montalbo, Kai Sotto and Aljon Mariano will be announced today (Sunday, May 20) at the SM Mall of Asia Music Hall.
Posted by Boy Raket at 6:30 AM