ONE Warrior Series Announces Next Leg of Recruiting for Season 2 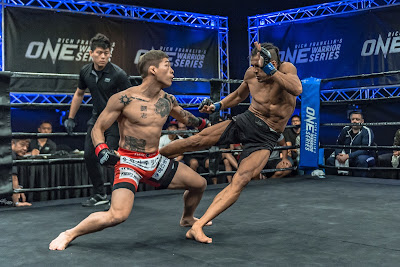 The largest global sports media property in Asian history, ONE Championship™ (ONE) and Rich Franklin's ONE Warrior Series have just announced that one of the next legs of recruiting for Season 2 will take place on 21 May at Tiger Muay Thai in Phuket, Thailand.

Rich Franklin's ONE Warrior Series is a travel series talent search which runs in 30-minute episodes. The show aims to discover new martial arts talent across Asia, providing promising young athletes with the platform to unleash their martial arts greatness. Franklin, who serves as the show’s host, travels across the Asian continent with co-host Jonathan Fong, searching for talent, while experiencing local cultures and testing their boundaries. Deserving prospects are rewarded with a USD 100,000++ contract with ONE Championship.

Online registration to the ONE Warrior Series tryouts can be found here: www.onefc.com/ows/register

Rich Franklin, CEO of ONE Warrior Series, stated: “In the second season of Rich Franklin’s ONE Warrior Series, Jonathan and I decided to not only hold tryouts, but to also travel to local schools scouting any talent that stands out. We will leave no stone unturned, as we will travel throughout Indonesia and Malaysia, stopping in Bali and Kota Kinabalu to name a couple. We will also stop in Labuan, Brunei, Phuket, Yangon and Baguio, before we head back to South Korea, Japan and China in North Asia.”

Jonathan Fong, Director and Co-Host of ONE Warrior Series, stated: “After recruiting a talented roster in our pilot season, Rich and I realized that not all the best martial artists necessarily come from the largest and busiest cities. Many of them train in solace, free from other pursuits to be able to chase their dreams with minimal distractions. There are gems scattered across Asia and we intend to find them.”

In addition, a fourth ONE Warrior Series entrant, Akihiro Fujisawa, was promoted straight into an ONE Championship contract during filming of the first season. He made his promotional debut at ONE: HEROES OF HONOR in Manila last 20 April, defeating Kaji Ebin via technical knockout, earning him the first tranche of the six-figure contract.

Episodes of Rich Franklin’s ONE Warrior Series are available on ONE Championship’s YouTube channel: https://www.youtube.com/user/OneFCMMA

Online registration to the ONE Warrior Series tryouts can be found here:
www.onefc.com/ows/register
Posted by Boy Raket at 5:40 PM