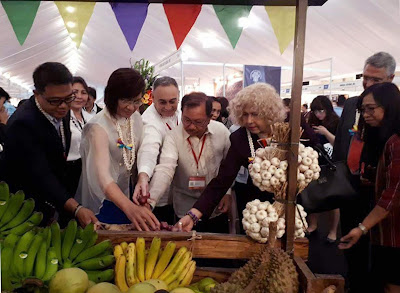 THE Department of Trade and Industry through its Center for International Trade Expositions and Missions (CITEM) featured the ‘best of the seas’ as it welcomed buyers for the 12th International Food Exhibition Philippines (IFEX) 2018 on May 25 to May 27 2018 at the World Trade Center and Philippine Trade Training Center in Pasay City.

Participated in by over 450 Philippine micro, small, and medium-sized enterprises (MSMEs) including those from coastal communities from Northern Luzon and Mindanao, the trade show is composed of four major exhibition halls: Food Philippines Hall, International Hall, Food Artisans Hall, and the Marketplace.

“This is also our way of supporting the promotion of agribusiness sector in the country that provides employment opportunities especially in the regions,” added Terrado.

Among the municipalities joining the said trade show is the General Santos City, the Tuna Capital of the Philippines.  Local companies will showcase their world‐class tuna varieties, including skipjack, yellowfin, bluefin, and bigeye tuna, in different packaging options during the three-day show.

“General Santos City is home to one of the world’s best‐tasting tuna catches available to the international and local market and we wanted to highlight this as we position the Philippines as a go‐to sourcing destination for high‐quality tuna and tuna‐like species,” said Terrado.

As of 2016, the city’s tuna industry generates 65 percent of the country's over-all tuna catch and employs around 200,000 workers.

According to Southeast Asian Fisheries Development Center (SEAFDEC), the Philippines is top three tuna producer in the world in terms of volume. Eighty (80) percent of Philippines seafood is exported to the United States and the European Union, with a value of approximately US $120 million export earnings per year.

“The Philippines is also currently ranked as the second largest manufacturer of canned and processed tuna in Asia, after Thailand, with a majority of this catch landed in the port of General Santos City,” said Terrado.

“We expect a more upbeat exchange of trade deals, sealing of partnerships and knowledge transfer through our B2B activities and learning seminars,” said Terrado.

From 2009 to 2017, the top 10 countries where these buyers came from are the United States, Japan, Singapore, China, United Arab Emirates, South Korea, Malaysia, Australia, Taiwan and Canada, respectively.

The 12th edition of IFEX is organized by the DTI-CITEM in close partnership with Department of Agriculture (DA), through the Bureau of Fisheries and Aquatic Resources (BFAR) and the Agribusiness and Marketing Assistance Service (AMAS).

*This is Press Release
Posted by Boy Raket at 5:20 PM