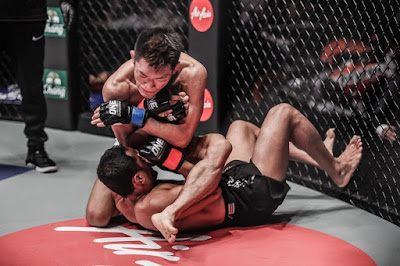 After grotesquely relinquishing his possession of the ONE Strawweight World Championship this past December, Yoshitaka “Nobita” Naito has been handed a golden opportunity to win back the gold-plated strap that he once called his and against the only man to ever defeat him.
The 34-year-old native of Matsudo, Japan has been granted a rematch against newly-minted division kingpin Alex “Little Rock” Silva in the main event of ONE: GRIT AND GLORY, which takes place at the Jakarta Convention Center on 12 May.
Nearly five months ago, Naito bowed down to Silva, who demonstrated his rapidly-evolving striking game to beat the then-undefeated Japanese champion by unanimous decision at ONE: WARRIORS OF THE WORLD in Bangkok, Thailand.
“Alex had more superiority in the cage on that night. I could not dictate the pace and do what I wanted to do. I was adapting throughout the match. In every aspect, my game plan failed,” he recalled.
Naito admitted that he was caught off guard by the pesky striking arsenal of Silva, a Brazilian Jiu-Jitsu world champion who previously exhibited his grappling prowess with five consecutive submission victories as he surged into world title contention last year.
“In the beginning, I thought his weakness was striking since he is a multi-titled Jiu-Jitsu practitioner. However, it turned out that his strikes hurt a lot,” he confessed. “That was my first time meeting an athlete who is good at everything. After the loss, I felt I was not good enough at anything.”
Although Naito revealed that it took him a few months to accept the outcome of his unsuccessful title defense against Silva last December, the disappointing defeat to the Brazilian gave him a renewed hunger to improve his craft.
“At first, it was very hard to accept. You can say that it was a rude awakening, but the loss gave me a fresh perspective. The heartbreak was transformed into a drive to win again,” he said.
While Naito has rededicated himself to progressing both his striking and his grappling skills, perhaps the biggest evolution is one that cannot be physically seen.
“I hope I got stronger. But what I am sure about is that my heart is definitely stronger than before,” he stated. 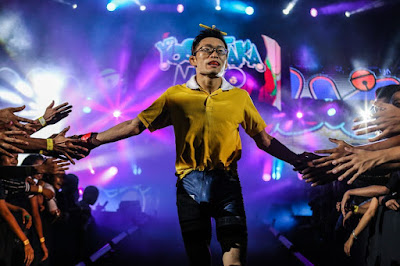 As he prepares to step inside the ONE Championship cage with Silva once more on 12 May, Naito now holds his Brazilian rival in high regard as he vows to try his best to capitalize on the golden chance that lies before him.
“I am so happy to get another chance to have a rematch against him. I really respect him. He is a great athlete,” he asserted.
“The championship belt is special for me. I am so honored to be able to fight the strongest athlete in the division whether I win or not. I can fight the strongest athlete, and I have a chance to get the championship belt. That makes it very special for me,” Naito added.
Almost five months removed from losing his coveted title belt to Silva, Naito’s competitive fire is burning intensely and is more driven than ever to return to glory.
“I will get my belt back. My ultimate goal is to become a champion again,” he assured.

*This is Press Release
Posted by Boy Raket at 6:10 PM