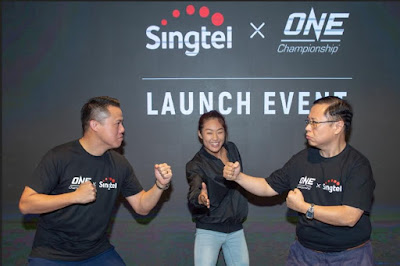 Singtel and its mobile associates Globe and Telkomsel today signed a Memorandum of Understanding to collaborate with ONE Championship, the world’s largest martial arts organisation, to deliver martial arts-related content and other digital assets to customers across Asia.
The Singtel Group and ONE Championship will explore integrating the Singtel Group’s mobile wallets and carrier billing services to power e-commerce functions in the just launched ONE Championship app which offers live and recorded telecasts of martial arts matches and events. Both companies will also consider jointly producing original content.
“We are excited to collaborate with ONE Championship to bring new entertainment offerings such as martial arts to our customers while raising the profile of the martial arts community here.” said Arthur Lang, CEO of International Group at Singtel. “Content, particularly premium sports content, delivered over our advanced network is one of the key pillars of our consumer strategy. This is why we will also be exploring ways to develop and deliver exclusive martial arts content to not just customers in Singapore and Australia but also our regional associates in Thailand, the Philippines, Indonesia and India. Sports content is a big winner with our consumers, with millennials comprising a large part of our customer base.”
ONE Championship CEO Chatri Sityodtong said: “We are pleased to enter into this MOU with communications giant, the Singtel Group, on a range of initiatives. ONE Championship is focused on bringing the unique action and adrenaline of our live ONE Championship events straight to our audience on all platforms, making sure that millions of martial arts fans around the world have access to our digital content. I am excited to work with Singtel in executing this vision, delivering the unique experience of Asian martial arts to the world.”
The MOU was announced alongside the launch of ONE Championship’s mobile app in Singtel’s newly-revamped flagship store, where Singapore’s mixed martial arts champion Angela Lee made an appearance. Lee will defend her ONE Women’s Atomweight World Championship title against Japan’s  Mei Yamaguchi on 18 May 2018.
Available on Android and iOS mobile platforms, the app aims to give fans of the sport access to ONE Championship live events, as well as their complete library of digital content for free. Content will be streamed in full HD and will also provide users with statistical information and a detailed background on ONE Championship superstars. Singtel Group subscribers can also look forward to perks such as exclusive or early access to content, ticket discounts and invites to VIP events at ONE Championship matches.

About ONE Championship™
ONE Championship is the largest global sports media property in Asian history. Headquartered in Singapore, ONE Championship is the home of martial arts and is the world's largest martial arts organization, hosting bouts across all styles of martial arts such as Muay Thai, Kickboxing, Karate, Kung Fu, Silat, Sanda, Lethwei, Mixed Martial Arts, Tae Kwon Do, Submission Grappling, and more. The world’s most exciting martial arts organization hosts the largest sports entertainment events across Asia, featuring some of the world's best martial artists and world champions, all signed to exclusive contracts, on the largest media broadcast in Asia. In addition to its digital platforms, ONE Championship broadcasts to over 1.7-billion potential viewers across 136 countries around the world with some of the largest global broadcasters, including Fox Sports, ABS-CBN, Astro, ClaroSports, Bandsports, Startimes, Premier Sports, Thairath TV, Skynet, Mediacorp, OSN, and more.

About Singtel
Singtel is Asia's leading communications technology group, providing a portfolio of services from next-generation communication, technology services to infotainment to both consumers and businesses. For consumers, Singtel delivers a complete and integrated suite of services, including mobile, broadband and TV. For businesses, Singtel offers a complementary array of workforce mobility solutions, data hosting, cloud, network infrastructure, analytics and cyber-security capabilities. The Group has presence in Asia, Australia and Africa and reaches over 685 million mobile customers in 22 countries. Its infrastructure and technology services for businesses span 21 countries, with more than 428 direct points of presence in 362 cities.