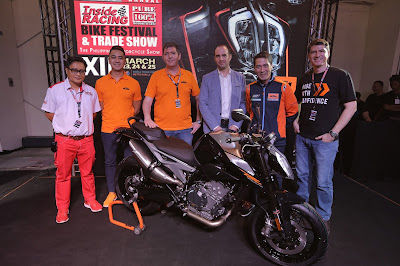 KTM Philippines recently launched its newest tool and one of Austria’s sharpest street weapons, the 790 Duke, at the country’s biggest bike fest, the Inside Racing Bike Festival and Trade Show held at World Trade Center. It also officially announced its partnership with Ibero Asistencia, the pioneering company for global roadside and travel assistance, as well as its free Zero2Podium motorcycle riding clinic for those who purchased any of the following KTM motorcycles: KTM 200 Duke, KTM 390 Duke, KTM RC200 or KTM RC390 during the 3-day Bikefest. Presenting the KTM 790 Duke to the guests and spectators were (L-R) Al Camba of Inside Racing, Julian Legazpi, managing director of KTM SEA, John Mckweon, customer service manager of KTM SEA, Antonio Toledano, general manager of Ibero Asistencia, Dino Santos, president and COO of Adventure Cycle Philippines Inc. (ACPI) and Carl Decloedt, vice president and after sales head of ACPI.