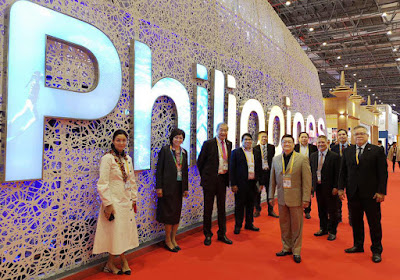 SHANGHAI – Department of Trade and Industry (DTI) Secretary Ramon Lopez opened the Philippine (PH) National Pavilion at the China International Import Exposition (CIIE) on 6 November. This aims to improve the market access of PH products into China. CIIE runs from 5 to 10 November and features 3,000 exhibitors from 130 countries.

“The Philippines appreciates the Chinese government’s thrust to deepen its globalization commitment.  CIIE is China’s way of conveying to the world that it is ready to open more its market and encourage more exporters to China,” said the DTI Secretary, Sec. Lopez added: “It sends a strong signal to the world that China would also like to help balance trade with its trading partners as China believes in promoting globalization that's is more inclusive, to achieve the goal of having shared prosperity with other countries.”

The 136-square meter PH national pavilion, themed “Partner Philippines: Building Value Together,” showcases the country’s initiatives in trade, investment, and tourism. It features 10 partner government agencies and companies as well as 11 universities. These universities are promoting their undergraduate and graduate programs, as well as English as a Second Language (ESL).

Aside from the national pavilion, there are 36 booths in the Enterprise Zone featuring Filipino exhibitors: 28 for food, five for consumer goods (apparel, accessories and consumer goods, electronics, automobile, and information technology), and three for services (tourism and service outsourcing).

Sec. Lopez cited the close trade relations between PH and China. China is PH’s largest import partner at US$ 17.5 billion in 2017 and fourth-largest export market at US$ 8 billion in the same year.