AXA Philippines, one of the country’s top insurance companies, reported that its first-half performance for 2018 has continued on the upward trajectory—driven by higher annualized premium equivalent (APE) and robust growth in total premium income (TPI).

Compared to the same period in 2017, total net income grew 35% to P1.3 billion on the back of new business and renewals. 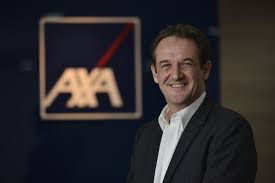 The first half of 2018 saw the launch of AXA Shared Services Centre Philippines, one of two Asian hubs offering support to various AXA entities around the world. AXA also expanded its reach and distribution network by opening new branches in Cabanatuan, Cagayan De Oro, and Pagadian.

Recently, AXA introduced its newest offering Asset Master, a single-pay investment-linked insurance product that allows customers to build a diversified investment portfolio of local and global investments. AXA Philippines also bagged a silver award from the prestigious Efma-Accenture Innovation in Insurance Awards for MyAXA Café, an online insight community that provides secure, ongoing, and real-time feedback from customers as a tool to aid in business decisión-making.
Posted by Boy Raket at 11:00 AM