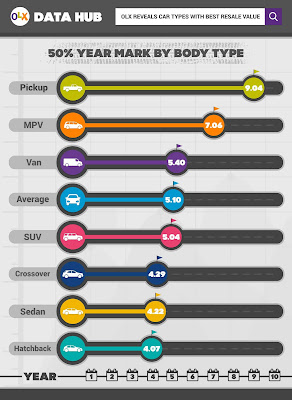 Is a vehicle’s resale value one of your considerations before purchasing a car? If it is, your best bet is a pickup truck, according to data released by the world’s leading classifieds platform, OLX. Vehicles in this particular classification, on average, take about 9 years to lose 50 percent of their suggested retail price (SRP).

Based on a sampling from OLX’s secondhand car listings in the country from August 2017 to August 2018, the extensive data comprises the top 11 automotive brands based on 2017 sales volume. On average, it takes 5.10 years for a vehicle’s SRP to get slashed to half, according to this sampling. Pickup trucks, multipurpose vehicles (MPVs), and vans, however, performed above average and take more time before they lose 50 percent of their value.

“A number of factors affect the pickup truck’s robust resale value,” says Manuel Roman, OLX Philippines’ Head of Cars. “The versatility and reliability of pickups make them desirable vehicles. In the brand-new vehicle market, light commercial vehicles--one of which is the pickup truck--are popular choices among consumers. In the secondhand market, the demand for pickups remains high. Without an oversupply in the market, they keep their value well.”

Meanwhile, car buyers looking for seven-seaters should consider including MPVs on their shortlist if they want a vehicle that doesn’t depreciate fast. Compared to sport utility vehicles (SUVs), MPVs keep their value longer: It takes 7.06 years on average before they lose half of their SRPs. SUVs, on the other hand, slash their value by 50 percent after 5.04 years. The infographic below shows the average number of years it takes before a particular vehicle classification loses 50 percent of its SRP.

OLX Philippines’ analysis of the data found that Mitsubishi, Isuzu, Nissan, and Toyota vehicles do not depreciate as fast as other brands. It takes Mitsubishi and Isuzu vehicles an average of 6.03 years before their price reach 50 percent of their SRP. Nissan-badged vehicles take 6.02 years before they lose half t of their value, while Toyota cars take 5.89 years.

It is important to note that just because a particular brand cuts its SRP by 50 percent earlier than average doesn’t mean it’s a substandard one. One of the factors that can affect a car’s depreciation is demand. The desire for vehicles bearing the badge may not just be as high as the other brands. In addition, o wners of these vehicles may be keeping their cars longer and sell only when the cars are older. Hence, the listings under these brands have relatively lower value compared to other marques.

OLX Philippines connects millions of Filipinos to buy and sell brand-new and used items, including automobiles and motorcycles, via their mobile phones or the web. Every month, around 45,000 vehicle listings are posted on the OLX platform. More than 1.4 million users log in to OLX monthly to check out the cars available or to post one for sale.
Posted by Boy Raket at 6:30 PM