BIBIANO FERNANDES AND KEVIN BELINGON STARE DOWN AT ONE: HEART OF THE LION OFFICIAL KICK-OFF PRESS CONFERENCE 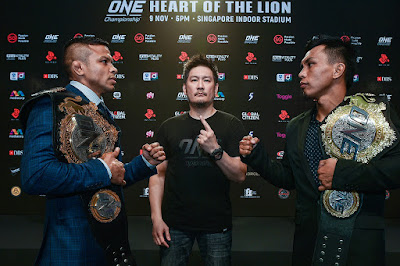 Singapore: The largest global sports media property in Asian history, ONE Championship™ (ONE), recently held the ONE: HEART OF THE LION Official Kick-Off Press Conference at the Marina Bay Sands Expo & Convention Center in Singapore. Reigning ONE Bantamweight World Champion Bibiano “The Flash” Fernandes of Brazil went face-to-face with the challenger, ONE Interim Bantamweight World Champion Kevin “The Silencer” Belingon of the Philippines for the first time ahead of their highly-anticipated showdown at the Singapore Indoor Stadium this Friday, 9 November.

Also in attendance were co-main event participants, Christian “The Warrior” Lee of Singapore and Kazuki Tokudome of Japan, as well as newly-signed ONE Championship athletes Demetrious “Mighty Mouse” Johnson and “The Underground King” Eddie Alvarez. In addition, ONE Championship also announced a World Grand Prix for the flyweight and lightweight divisions.

Chatri Sityodtong, Chairman and CEO of ONE Championship, stated:

“It has always been a pleasure to be here in Singapore. This is where I unified the titles in 2013. I will get a chance to do it again in a rematch with a tough opponent in Kevin Belingon. I fought him in the past. I finished him before, and I will finish him again. I am ready for the war on Friday, and I am prepared to do my best.”

“I trained very hard for the match this coming Friday. I’ve waited for a long time to face Bibiano Fernandes again. I am 100 percent ready and confident. I will do my best to win this time. Be there to support us on November 9.”

“Even though this is a short notice bout, I am extremely prepared. We train year round, and I’m prepared to face anyone, anytime. I’m ready for anything. I am thankful for the opportunity to showcase my talents once again.”

“It’s an honor to be part of this organization. It’s a new chapter in my professional career. ONE Championship is the perfect stage for me to face top-level competition. I look forward to my match against a talented athlete like Christian Lee.” 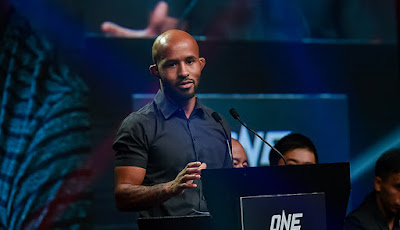 “I spent seven years in North America fighting the best in the world. I’ve never travelled to Asia to fight the best. I think now is the perfect time to do it. Now that they just announced a World Grand Prix for the flyweight division, it’s has always been a dream of mine to actually compete in Asia in a World Grand Prix. The biggest thing that you can expect from me for coming over here to compete in Asia is that I’ll do my best. I am taking no shortcuts.”

“It was in Asia where I made a name for myself and started my career. Everything has come full circle for me. I can’t say how excited and grateful I am to be part of the ONE Championship family. This is where true martial arts lives. I’ve been away from Asia so long. It’s good to be back. I feel like I found my way again with ONE Championship. I can respect my opponents, and I can go in and fight like a man. I know my lifelong martial arts journey will be truly appreciated here.” 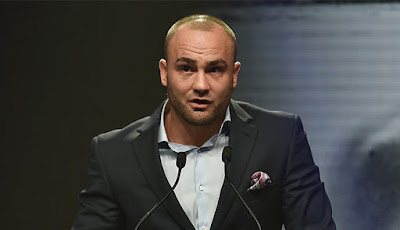 About ONE Championship™
ONE Championship (ONE) is the largest global sports media property in Asian history, and the largest producer of millennial live sports content in Asia. Headquartered in Singapore, ONE is the Home of Martial Arts, and is the world's largest martial arts organization, hosting bouts across all styles of martial arts such as Muay Thai, Kickboxing, Karate, Kung Fu, Silat, Sanda, Lethwei, Mixed Martial Arts, Tae Kwon Do, Submission Grappling, and more. ONE hosts the biggest sports entertainment events across Asia, featuring some of the world's best martial artists and world champions on the largest global media broadcast in Asia. ONE eSports, a subsidiary of ONE Championship, runs Asia's largest global eSports Championship Series with some of the biggest blockbuster game titles in the world. In addition to its digital platforms, ONE Championship broadcasts to over 1.7 billion potential viewers across 138 countries with some of the largest global broadcasters, including Fox Sports, ABS-CBN, Astro, ClaroSports, Bandsports, Startimes, Premier Sports, Thairath TV, Skynet, Mediacorp, OSN, and more.
Posted by Boy Raket at 9:00 PM