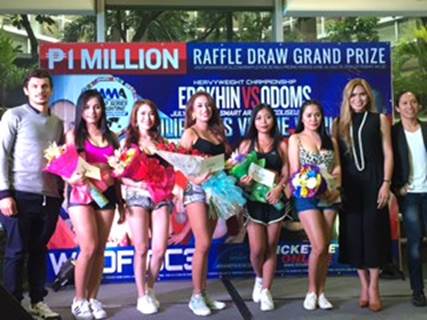 Christine Nolasco, from Meycauayan, Bulacan bested 4 other finalists and was chosen as the new international ring girl of World Series of Fighting Global.  She is expected to make her decagon debut on Saturday, July 30, during the much anticipated Fight Night at Smart Araneta Coliseum, along with Michelle Jeanpierre, who is considered as one of the hottest ring girls in MMA.

WSOF-GC will host WSOF-GC 3 Philippines at Smart Araneta Coliseum on July 30, 2016. Tickets start at PHP300 with ringside seats available for PHP4000. Tickets are now on sale at http://www.etix.com/ticket/p/2988982/wsof-global-championship-3philippines-quezon-city-smart-araneta-coliseum. Smart Araneta Coliseum has been host to many great events over the years, but is most notably known for Ali vs Frazier III ‘The Thrilla in Manila’.

World Series of Fighting Global’s ultimate mission is to bring together the best athletes from countries and organizations across the world to compete for a true, globally-recognized world champion.  Follow them on Twitter @WSOFGlobal.


*This is Press Release
Posted by Boy Raket at 7:42 AM