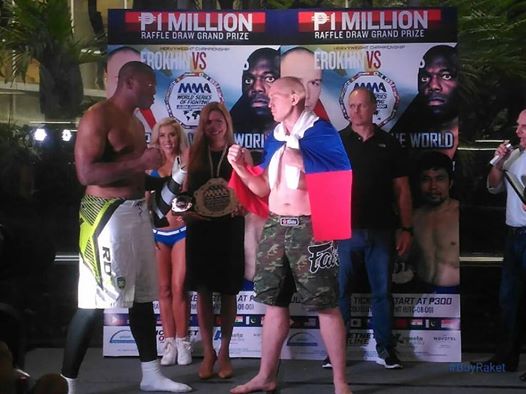 World Series of Fighting – Global Championship (WSOF-GC) has finished with their weigh ins and all fights are a go. All main card fighters made weight without incident, including the Heavyweight Title Main Event, Russia’s Evgeny Erokhin (230) vs United States’ Richard Odoms (262).

World Series of Fighting – Global Championship (WSOF-GC) will air LIVE and FREE in its entirety this weekend, starting at 6am EST this Saturday, July 30 in United States at wsofgc.com. Fans can access the entire 10-fight event atwsofgc.com,as well as through mmaweekly.com, globalcombatnetwork.com, and fightnewsaustralia.com.
Another unique element that WSOF-GC is bringing to their fans is a 360-degree perspective of the fights courtesy of their new partner, Livit. Fans can access this through the LivitNow app to watch the event from a perspective like no other. Fans will have the capability to control how they see the action and the crowd that night.
In addition to the live, free event, wsofgc.com is hosting a FREE weekend of its Global Fight Library. Fans can log on to the website and see not only this weekend’s bouts, but previous events including previous fights from WSOF-GC affiliates (United Kingdom’s ICE FC, Argentina’s ULLAMP, Italy’s SLAM FC, Costa Rica’s Calvo Promotions, Puerto Rico’s Royalty Combat, and Philippines’ Underground Battle MMA).
WSOF-GC will host WSOF-GC 3 Philippines at Smart Araneta Coliseum on July 30, 2016. Tickets start at PHP300 with ringside seats available for PHP4000. Tickets are now on sale at all Ticketnet Outlets or online at http://www.etix.com/ticket/p/2988982/wsof-global-championship-3philippines-quezon-city-smart-araneta-coliseum.

* Jessdan Dela Pena failed to reach his contracted weight of 155, coming in at 162. His opponent, Kelvin Ong, came in at 150, so he was given two hours to cut to 160 in order for both fighters to be within 10 pounds, but failed to do so. His opponent weighed back in at 156 and the fight was declared official. Jessdan and Kelvin agreed to a 50% of Jessdan’s total fight purse, which will be given to Kelvin.

** Yadwinder Singh failed to make weight on his first attempt (127.5) but managed to make the 125-lb mark within an hour.

*This is Press Release
Posted by Boy Raket at 4:08 PM