The Whitney Houston Show 2016 Live in Manila this August 2016 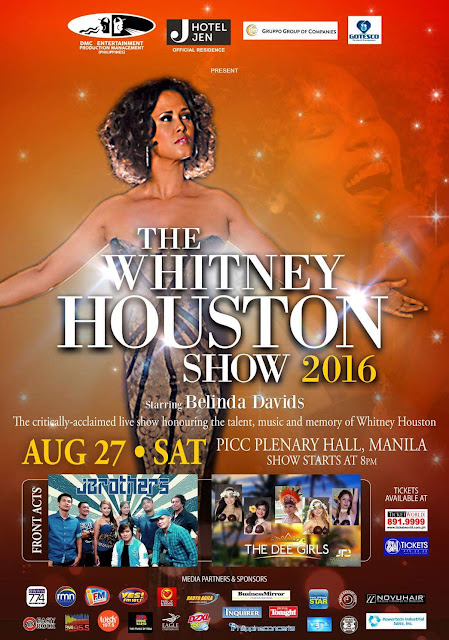 "The Greatest Love of All" I should say will be not only be the best recall song that I will remember Whitney Houston with but also what we can say on the contribution she made to the music industry and the world. This time we will Re-Live her in this astounding tribute concert echoing around the world.

This will stage the full production crew from the US starting with the band, dancers and theatrical effects, everything that The Whitney Houston Show have the Philippines will experience. Featuring the breathtaking voice of Belinda Davids who's the perfect person to recommence the world concert tour of Whitney. Belinda, being the top pick to perform on Whitney's behalf was chosen among 15,000 candidates in 12 countries who auditioned for the concert.

Belinda Davids was born in Port Elizabeth, South Africa, and began performing professionally at the age of 14. She has never had vocal training and is blessed with a 4 octave vocal range, and hence the ability to sing any genre. Her musical heart has always been R&B; Belinda's inspirations as a child were Aretha Franklin, Anita Baker, Chaka Khan, Donny Hathaway, Michael Jackson and the one artist whom she still, to this day, honours in every show she performs – Whitney Houston.

To give you an idea on how good Belinda is, take a look at the comments below:

“The soul of Whitney Houston is not only alive on the Mandela Stage but its effortless, mesmerizing and in full voice. Don't believe me? You will.”
- Rave Review

“If you had walked into the iZulu Theatre blindfolded and listened to the opening song, you would be forgiven for thinking you were listening to Houston herself, Davids is that good.”
- ToNight

Reminise with the famous hits of her 30 year career like  'How Will I Know', 'I Wanna Dance With Somebody', 'Where Do Broken Hearts Go', 'Didn't We Almost Have It All', 'I'm Every Woman', 'One Moment In Time', 'I Have Nothing' and of course, 'I Will Always Love You' and many more.

Don’t miss this critically acclaimed once in a lifetime live show of a tribute to a woman who has long been an icon of pop music and vocal ability, The Greatest Love Of All – The Whitney Houston Show Tour 2016 on Friday, August 26th, 8PM at the IEC Pavillon, Cebu City and on Saturday, August 27th at the PICC Plenary Hall, Pasay City, Manila.