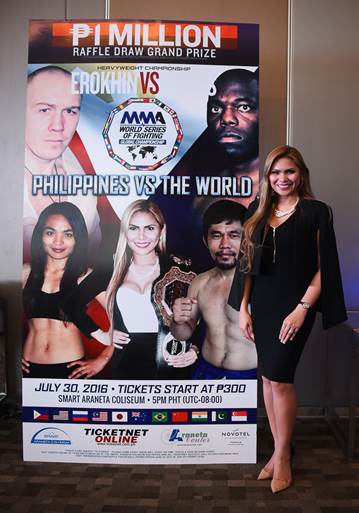 Las Vegas-based MMA organization, World Series of Fighting Global, popularly known as WSOF Global, has big plans for the Philippines.  Interestingly so, its owner, Dunesa Hesser is a Filipino, born in Negros Occidental.

“I am proud to be Filipino, I was born in Escalante City, Negros Occidental to an ordinary family.  We weren't privileged at all.  I also lost my parents at a very young age.  With 8 other siblings, I felt the pressure to rise above our situation.  But this only gave me the determination and the drive to succeed and overcome life’s trials.  It hasn’t been easy, my life is a telenovela, but I was lucky enough to have had the chance to move to the United States at 16 years old, so it was from there that my luck changed.  But I still kept on working hard, working almost non-stop, because I was the breadwinner of the family.”, Hesser says.

Hesser prides herself of being a Filipino.  In fact she still speaks her native tongue, and says that she has taught the local language and the Filipino culture as well, to her kids in the United States.

Dunesa says, “You know it is because of where I came from that I understand the difficulty of some of these fighters.  Yun pag nagsisimula ka pa lang at kailangan tiisin mo lahat ng pagod, gutom at puyat.  Then you are hit with the decision, should I go on or should I quit?  Should I accept my fate or fight it?  I know that feeling, I’ve been a fighter my whole life.  But I had a twist of fate, also a bit of luck that came my way, after all the years of perseverance.  Yan and gusto ko ibahagi man lang thru World Series of Fighting Global.  That as a fighter, you can change your life, you can change your fate and your destiny.”

Dunesa strives to inspire Filipino fighters and give them an opportunity to fight inside the WSOF Global MMA decagon.  “You know, the Philippines is known very well for combat sports. Despite that, very few Philippine MMA fighters have gained global recognition. We hope to change that by promoting them not only on events in the Philippines, but international events as well”, she says.

Five Filipino fighters will be showcasing their wares on at the WSOF GC 3: Philippines vs. the World, which will be held on July 30 at the Smart Araneta Coliseum.  The fighters include Jenelyn Olsim, Jessdan Dela Pena, Neil Larano, Jujeath Nagaowa and Mario Sismundo.

During the Fight Night itself on July 30, a lucky member of the audience will win P1,000,000.  The winning ticket will be announced during the event itself at the Smart Araneta Coliseum.

“I would like to change not only the fighters’ lives that night, but also change the life of someone from the audience.  Someone will win P1,000,000  that night.  I think we are the first MMA promoter in the country who will give away P1,000,000 to a lucky MMA fan.  So to my kababayans, we hope you can watch and support us on July 30”, says Dunesa.

Indeed, Dunesa seems to be in step in fulfilling her goal of changing the lives of MMA fighters and fans alike.

Tickets start at PHP300 with ringside seats available for PHP4000. Tickets are now on sale at http://www.etix.com/ticket/p/2988982/wsof-global-championship-3philippines-quezon-city-smart-araneta-coliseum. Smart Araneta Coliseum has been host to many great events over the years, but is most notably known for Ali vs Frazier III “The Thrilla in Manila”.

World Series of Fighting Global’s ultimate mission is to bring together the best athletes from countries and organizations across the world to compete for a true, globally-recognized world champion.  Follow them on Twitter @WSOFGlobal.

*This is Press Release
Posted by Boy Raket at 12:38 PM