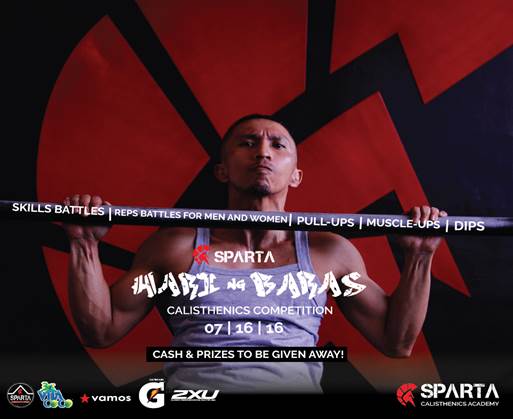 SPARTA Calisthenics Academy (SCA), which is housed in the hectare-wide sports facility - SPARTA along Pioneer Avenue in Mandaluyong City,  is set to present another groundbreaking calisthenics event in the country, called HARI NG BARAS.

SPARTA Calisthenics Academy created the biggest gathering of calisthenics practitioners and followers last year, when it launched its SPARTA Battle of the Bars event.  The event saw an attendance of 300 followers and participants.  It sparked an interest in the fitness industry after the first calisthenics event was held in the country, and this year, it expects to have a “bigger and better event”, this according to Amanda Fernandez, owner of SPARTA.

“Since last year’s event, I feel more people have practiced their endurance, strength, and creativity. I can't wait to see how the past contestants improved since the last calisthenics competition. We may even have those who couldn't make it last year finally come by this year”, Fernandez continues.

SPARTA Calisthenics Academy’s Founder Ton Vergel de Dios says, “SPARTA Hari ng Baras this year is a level up from SPARTA Battle of the Bars last November. This year, a mobile bar set up will be used outdoors for the event. The rig was designed specifically for showcasing skills and strength with bodyweight movements.”

“Competitors from last year's battle of the bars can expect tougher competition this year at SPARTA Hari ng Baras. There will be athletes coming from all over the country including Baguio and Iloilo”, Vergel de Dios adds.

Participants who are part of Philippine Street Workout and Calisthenics Association or PSWCA may register for free while non-members may easily join the group or pay a small fee to join the reps battles. 1x1 and 2x2 skills battles registration is nearly complete and those interested may message SPARTA Philippines on Facebook.

Prizes at stake include cash prize, gear from 2xu and Vamos socks.  Event sponsors include Vita Coco and Gatorade.


*This is Press Release
Posted by Boy Raket at 1:17 PM