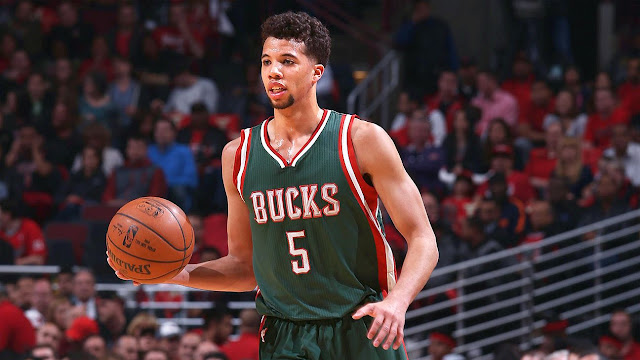 The National Basketball Association (NBA) announced today that 2013-14 Kia NBA Rookie of the Year Michael Carter-Williams of the Milwaukee Bucks will headlineNBA 3X Philippines 2016 presented by Panasonic, which returns to Manila from Aug. 19-21 at the SM Mall of Asia Music Hall.  Registration for NBA 3X Philippines 2016 begins July 29 at www.nba3x.com/philippines.

Returning for the sixth consecutive year, NBA 3X Philippines 2016 will include a 3-on-3 tournament featuring 200 men’s and women’s teams from all over the country, as well as performances by local artists and DJs.  The event will showcase authentic NBA entertainment and activities free for fans of all ages to experience throughout the weekend.  Carter-Williams will be present throughout the event to inspire the athletes and interact with fans.

“I’m excited to visit the Philippines and experience Filipino fans’ passion for basketball during the NBA 3X,” said Carter-Williams.  “Being a part of this event is a great opportunity to see the growth of the game internationally, and I look forward to working with these talented athletes.”

“We are proud to stage the sixth edition of NBA 3X in the Philippines, which continues to provide fans with a platform to interact with some of the league’s marquee talents,” said NBA Philippines Managing Director Carlo Singson.  “In collaboration with our new presenting partner Panasonic, NBA 3X will once again bring out the players’ competitive spirit and showcase the NBA experience to thousands of Filipino fans through a weekend of fun and entertainment.”

Carter-Williams, a 6’6” guard out of Syracuse University, was drafted 11thoverall by the Philadelphia 76ers in the 2013 NBA Draft.  He was named the 2013-14 Kia NBA Rookie of the Year and was unanimously selected to the 2013-14 NBA All-Rookie First Team.  Carter-Williams joined the Bucks during the 2014-15 season, and averaged 11.5 points, 5.2 assists and 5.1 rebounds per game last season.

Registration for NBA 3X Philippines 2016 begins July 29 on a first-come first-serve basis at www.nba3x.com/philippines and runs until Aug. 14 or until all slots are full.  The Philippine International Convention Center will once again serve as a secondary venue to accommodate the teams.

The official partners of NBA 3X Philippines 2016 presented by Panasonic include CloudFone, Globe Telecom, Touch Mobile, and Sprite, with SM Mall of Asia and Spalding serving as Supporting Partners.  Official NBA broadcasters for the event are ABS-CBN Sports and Action, Basketball TV, and NBA Premium TV.

For more information on NBA 3X Philippines 2016 and to register for the 3-on-3 tournament, log on to www.nba3x.com/philippines.  Fans can also get event updates by following the NBA on Twitter atwww.twitter.com/nba_philippines and through Facebook atwww.facebook.com/nba3xasia and www.facebook.com/philsnba.  For all things NBA, visit www.nba.com.

About the NBA
The NBA is a global sports and media business built around three professional sports leagues: the National Basketball Association, the Women’s National Basketball Association, and the NBA Development League.  The league has established a major international presence with games and programming in 215 countries and territories in 49 languages, and NBA merchandise for sale in more than 125,000 stores in 100 countries on 6 continents.  NBA rosters at the start of the 2015-16 season featured 100 international players from 37 countries and territories.  NBA Digital’s assets include NBA.com and the NBA app, which achieved record traffic during the 2014-15 season, as well as NBA TV.  The NBA has created one of the largest social media communities in the world, with more than one billion likes and followers globally across all league, team, and player platforms.  Through NBA Cares, the league addresses important social issues by working with internationally recognized youth-serving organizations that support education, youth and family development, and health-related causes.

About Panasonic Manufacturing Philippines Corporation
Panasonic Manufacturing Philippines Corporation (PMPC), with factories located in Taytay, Rizal and in Sta. Rosa, Laguna is a manufacturer, importer, and distributor of electronic, electrical, mechanical, electro-mechanical appliances, other types of machines, parts and components and related products bearing the brand name, “Panasonic” in the Philippines. PMPC primarily manufactures refrigerators, air conditioners, washing machines, and electric fans.  The company has a wide base of sales, distribution, and service centers strategically located at key municipalities, cities, and provinces all over the Philippines.  PMPC posted a sales performance of 8.7 billion pesos for the year ended March 31, 2016.  For more information about the company, please visit PMPC’s website athttp://www.panasonic.com/ph.
Posted by Boy Raket at 4:42 PM