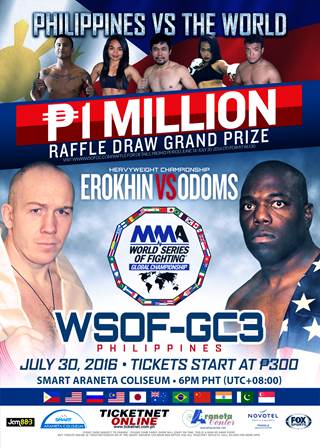 A programming license agreement was reached between WSOF-GC and FOX Networks Group, seeing FOX Sports Philippines as the Official Media Partner for the Manila event this Saturday, July 30, and the exclusive Philippine Pay TV home for the 2016 WSOF Global Championship Events. WSOF Global Championship 3 airs July 31 at 10am on FOX Sports Philippines, with multiple repeats the following week, and will likewise be available via linear streaming and via video-on-demand via www.FOXsportsasia.com and FOX Sports Play shortly after.
Jude Turcuato, SVP and GM of FOX Networks Group Philippines said, "FOX Sports has always aligned itself with the biggest, top-tier international sports properties. At the same time, we realize the value of local relevance and being able to cater to the Filipino sports fan. We are excited to work with World Series of Fighting Global Championship, to help further their global brand to this market, and we hope to contribute in growing MMA in the Philippines through this partnership.”
“Today marks a huge step in the direction that WSOF Global is taking on airing our events around the world,” stated Dunesa Hesser, Owner of WSOF-GC. “We may not have the brand that UFC has, but we certainly have the talent. Our first fight with FOX Sports Philippines airs the day after the live event, which includes a main event with our reigning heavyweight champion, Evgeny Erokhin, on a 9-fight KO win streak, against 11-2 Richard Odoms, who was previously signed with the UFC but was released due to injury before he could make his debut there. Our event also showcases a 4-man tournament featuring four of the best flyweights in the world, as well as undefeated prospects from Philippines, Pakistan, and India. This exposure will be great for our company, the fighters, and for FOX Sports, as we continue to be the leading brand in the Asian market.”
Fight fans can also watch a replay of the fights at wsofgc.com. For $4.99/month, you can have access to the entire WSOF Global Fight Library, which not only includes WSOF-GC events, but affiliate events from 13 countries on 6 continents from around the world.
WSOF-GC will host WSOF-GC 3 Philippines at Smart Araneta Coliseum on July 30, 2016. Tickets start at PHP300 with ringside seats available for PHP4000. Tickets are now on sale at http://www.etix.com/ticket/p/2988982/wsof-global-championship-3philippines-quezon-city-smart-araneta-coliseum. Smart Araneta Coliseum has been host to many great events over the years, but is most notably known for Ali vs Frazier III “The Thrilla in Manila”.
World Series of Fighting Global’s ultimate mission is to bring together the best athletes from countries and organizations across the world to compete for a true, globally-recognized world champion. Media inquiries should be sent to Jason Lilly, Vice President of Operations of World Series of Fighting Global, at jlilly@wsof.asia. Follow them on Twitter @WSOFGlobal.