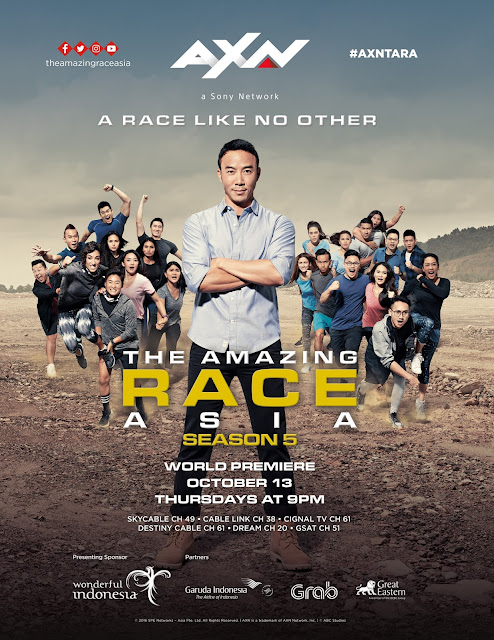 Get ready for a race like no other as AXN prepares to unleash The Amazing Race Asia Season 5 in its world premiere on October 13 at 9pm.

Adrenaline-fueled action mixed with nail biting drama and comedic overtones sets this 10-episode season apart from the pack as 11 teams from six different countries vie for the winning crown and USD100,000 in cash.

Hailing from Indonesia, Malaysia, Philippines, Singapore, Thailand and Vietnam, the teams are an eclectic bunch of brains, brawn and beauty united by their determination to win, while having a bit of fun along the way.

Virginia Lim, Senior Vice President and Head of Content, Production and Marketing, Sony Pictures Television Networks, Asia said, “This season is the most dramatic, crazy and surprising yet. It’s a wild, culturally mesmerizing ride against some truly spectacular destinations. One second a team is in the lead, only for another to come out of nowhere to take top spot. It’s anyone’s race!”

During each episode every Thursday at 9pm, AXN viewers can take their place in the middle of the action and interact with celebrity show host Allan Wu and their favorite teams live via social platforms using #AXNTARA and @AXNTARA

“I’m excited to chat with viewers and share the race experience throughout the series. We have created a lot of exclusive race footage that is only available online. It will add a whole new dimension to watching the race as viewers will witness what’s happeningbehind-the-scenes like never before,” said Allan.

The Amazing Race Asia premieres on Thursday, October 13 at 9:00pm, first and exclusively on AXN.

The 11 chosen team from six countries across Asia and represent a true cast of character with diverse personalities,backgrounds, talents and relationships. The team line up includes