2 World Title Fights set for ONE: Defending Honor in Singapore on November 11 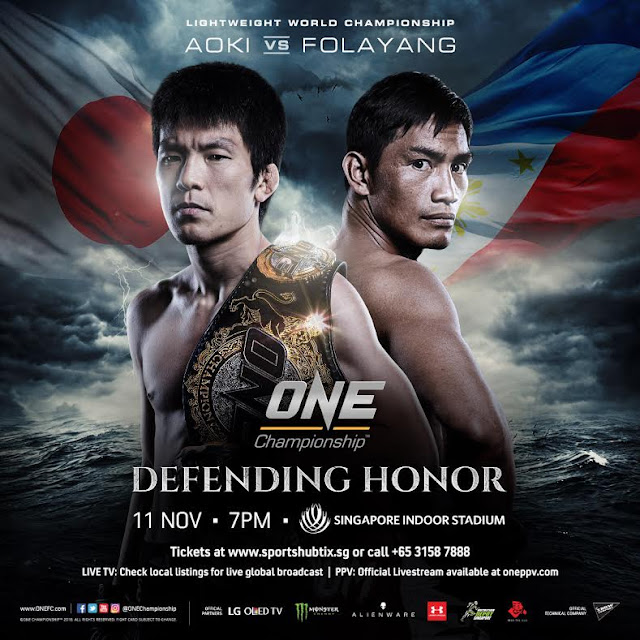 The largest sports media property in Asian history, ONE Championship™ (ONE), has just announced additional bouts for ONE: DEFENDING HONOR, which is set to rock the Singapore Indoor Stadium on 11 November. In the main event, ONE Lightweight World Champion Shinya Aoki will defend his title against Eduard Folayang of the Philippines. In the co-main event, ONE Featherweight World Champion Marat Gafurov will do battle with former titleholder Narantungalag Jadambaa of Mongolia in a highly-anticipated rematch.

Tickets for ONE: DEFENDING HONOR are available at http://www.sportshub.com.sg/sportshubtix/Pages/one-defending-honor.aspx

CEO of ONE Championship, Victor Cui, stated: “2016 has been an amazing year for ONE Championship. After meeting with the biggest names in the industry at the Asia MMA Summit, we are proud to announce a spectacular fight card set for the Singapore Indoor Stadium this November. We are going in with two world title fights that will set the ONE Championship cage ablaze with world-class MMA action and excitement, along with a series of really solid supporting bouts.”

Lightweight veteran Shinya “Tobikan Judan” Aoki of Shizuoka, Japan, is one of the world’s most decorated mixed martial artists. He is the DREAM Lightweight Champion, former Shooto Welterweight Champion, and the reigning ONE Lightweight World Champion. The 33-year-old Aoki is a Brazilian jiu-jitsu black belt under Yuki Nakai and has won multiple grappling tournaments across the globe. He also holds a black belt in judo. A veteran of over 40 professional bouts which includes an impressive 25 victories by submission, Aoki’s reputation as a grappling specialist is unrivaled. Aoki is currently riding a nine-fight win streak, and is set to step back inside the ONE Championship cage to defend his lightweight title against Eduard Folayang.

Eduard “Landslide” Folayang of the famed Team Lakay in Baguio City is one of the Philippines’ most experienced mixed martial artists. After more than eight years as a professional competing in various promotions, the wushu specialist has amassed a stellar 16-5-0 mixed martial arts record. Folayang figured in impressive victories in his last two bouts, overcoming both Tetsuya Yamada and Adrian Pang, showcasing a highly-improved wrestling and grappling offensive arsenal. Currently at the peak of his abilities as a combat sports athlete, Folayang will get the opportunity of a lifetime when he steps inside the cage across ONE Lightweight World Champion Shinya Aoki.

Marat “Cobra” Gafurov of Dagestan, Russia, is the reigning ONE Featherweight World Champion. An undefeated mixed martial artist with 14 wins and no losses, Gafurov is a high-level grappler with 10 of his wins coming by impressive submission over top-caliber opponents. Rarely challenged and always dominant, Gafurov captured the featherweight title with a gutsy victory over former champion Narantungalag Jadambaa in an epic battle. Now the two are set to lock horns once again inside the ONE Championship cage in a much-awaited rematch.

Former ONE Featherweight World Champion Narantungalag Jadambaa of Mongolia is one of the top contenders in ONE Championship’s deep featherweight division. At 12 wins and four losses, Jadambaa has faced the biggest names in Asian MMA and has wins over notable ONE athletes Adrian Pang, Honorio Banario, and Koji Oishi. In his last two bouts, Jadambaa finished two highly-regarded fighters in Kotetsu Boku and Eric Kelly, earning him another shot at reigning champion Marat Gafurov.

Eddie “The Magician” Ng is a 30-year-old lightweight standout originally from Hong Kong. He is a ONE Championship veteran who has been with the promotion since its first event in 2011. At his best, Ng is a devastating striker with lightning quick hands and feet, as well as a highly technical grappler with a wide range of submissions. Training out of Evolve MMA in Singapore, Ng works with the best talent in one of Asia’s top martial arts gyms. He returns to the ONE Championship cage looking to bounce back from a recent setback, but will have to go up against Adrian Pang.

Adrian “The Hunter” Pang is a mixed martial arts veteran from Queensland, Australia, with a 22-9-2 professional record. The 38-year-old Pang has decimated opponents with his power and no-frills approach to striking in nearly two decades as a professional MMA athlete. He is known for his incredible durability and overwhelming strength, along with his ability to walk through opponents with relative ease. Pang looks to make a triumphant return to the winner’s circle against Eddie Ng.

26-year-old Timofey Nastyukhin is a professional mixed martial artist competing in ONE Championship’s stacked featherweight division. He owns a 10-2-0 record with all of his wins coming by spectacular finish. With four submissions and six knockouts on his resume, Nastyukhin is considered one of the finest offensive fighters in the promotion. He owns stoppage wins over top fighters Rob Lisita and Yusuke Kawanago, and now returns to action against Japanese MMA veteran Kotetsu Boku.

Kotetsu “No Face” Boku, although originally from South Korea, is a Japanese mixed martial arts legend and the former ONE Lightweight World Champion. With more than 30 professional fights on his fight resume, Boku has the experience of a seasoned veteran and has seen it all inside the cage. Always a crowd pleaser, Boku utilizes his dynamic boxing background with world-class grappling to subdue his opponents. He’ll now get the chance to put on a show once again opposite Russia’s Timofey Nastyukhin.

21-year-old Singaporean prospect Amir Khan is a professional mixed martial artist competing in ONE Championship’s stacked lightweight division. He is considered one of the most promising young talents to represent the country on the international stage of MMA. Khan is currently riding a two-fight win streak with both victories coming by way of knockout. He will make his much-anticipated return to competition by taking on the undefeated Samir Mrabet.

Samir Mrabet is a 31-year-old professional mixed martial artist from Brussels, Belgium, by way of Monarchy MMA in Kuala Lumpur, Malaysia. Unbeaten at four wins and no losses, Mrabet owns three highlight-reel finishes over solid competition and is currently on a two-fight win streak in ONE Championship. Featuring a robust ground game coupled with a solid striking arsenal, Mrabet is set to take on Singaporean prospect Amir Khan.

Women’s Brazilian jiu-jitsu legend Michelle Nicolini is a 34-year-old professional mixed martial artist competing in the ONE Championship women’s strawweight division. Nicolini is a member of the BJJ Hall of Fame and an eight-time black belt world champion, and owns a 2-1 record which includes two impressive submission victories. A tremendous technical grappler, Nicolini recently relocated to Singapore to join the Evolve Fight Team and will make her ONE Championship promotional debut against Egypt’s Mona Samir.

Mona Samir of Cairo, Egypt is a professional mixed martial artist with a 1-2-0 record. She made her promotional debut against ONE Women’s Atomweight World Champion Angela Lee a year ago, and has since then gained additional fight experience in other MMA promotions. She returns to ONE Championship to take on a monumental challenge against eight-time BJJ black belt world champion Michelle Nicolini.

ONE Championship is the largest sports media property in Asian history. Headquartered in Singapore, the world’s most exciting mixed martial arts organization hosts the largest sports entertainment events across Asia featuring the best Asian mixed martial artists and world champions, all signed to exclusive contracts, on the largest media broadcast in Asia. ONE Championship is broadcast to over 1 billion viewers across 118+ countries around the world with some of the largest global broadcasters, including FOX Sports, Setanta, MNC, Astro, Thairath TV, ABS-CBN, TV5, MYTV, HTV, Esporte Interativo and more.