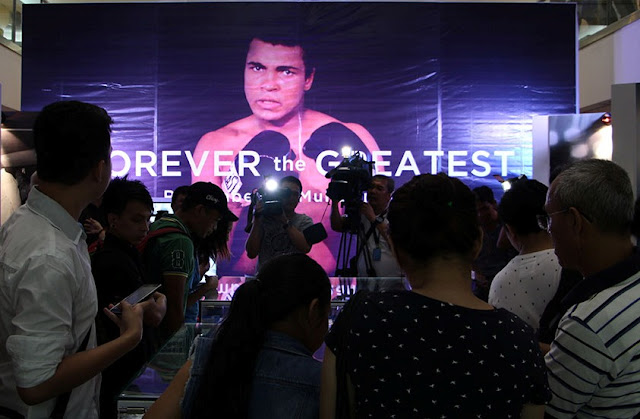 The Araneta Center celebrates the 40th anniversary of the iconic Ali Mall – the first-ever fully enclosed shopping mall in the country.

Named after the late legendary world heavyweight champion Muhammad Ali, Ali Mall was inaugurated on June 30, 1976 with Ali himself in attendance. Ali fulfilled his promise to return to the Philippines after winning against Joe Frazier in the “Thrilla in Manila” the year before and was the guest of honor at the event attended by VIPs, government officials, Araneta Center executives, and members of the Araneta family.

Though the concept of a mall has since evolved, Ali Mall was the first to house a Cineplex and to introduce the concept of a food court, located at the top most level beside the cinemas. Ali Mall also pioneered the integration of entertainment to the shopping experience with Skatetown, the largest indoor skating rink in its time. Another unique feature was a five-level car park connected to each floor of the shopping area. With its offerings and design features, Ali Mall changed the shopping experience by putting a premium on customer comfort and convenience and in the process melding itself to the lifestyle of its patrons with its choices of shopping, services, dining, and entertainment.

Four decades later, the mall still operates with the same guiding principle – to be a part of its guest’s lifestyle. As the mall evolved, it introduced, among others, the first digital cinemas in the country. Today, aside from offering a comfortable destination of value-for-money shopping options, Ali Mall also offers a wide array of dining choices fit for families and friends. The mall also features the convenience of the Government and Banking Center, a one-stop, full service venue that holds 10 government satellite outlets – including a Department of Foreign Affairs (DFA) branch that handles passport and document processing and soon, a Land Transportation Office (LTO) branch and four full-service bank branches.

To celebrate four decades of being part of the Filipino lifestyle, Ali Mall will hold a special sale and offer promos on the weekend of its anniversary, from June 30 to July 3.

The shopping concept that Ali Mall pioneered has since become a blueprint for many other malls to emulate and build upon. Like its namesake, it carries a legacy that has touched the lives of many, and will continue to do so for years to come.

As Araneta Center continues its redevelopment as a retail, office, entertainment, hospitality, and residential district, many new concepts are expected. Although Ali Mall will retain its standing as the country’s first mall, its claim will not solely be just being the first, it will continue to evolve, as it has done in the past to meet the needs of the lifestyle of its community.

*This is Press Release
Posted by Boy Raket at 11:48 AM