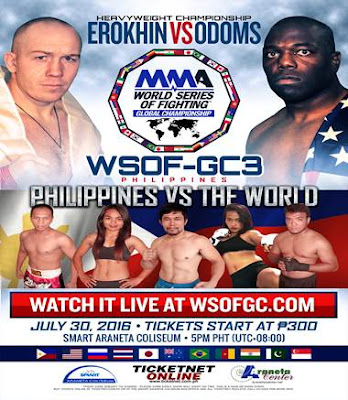 World Series of Fighting – Global Championship (WSOF-GC) has announced a heavyweight championship main event for their next event, which also marks their first Global event in Philippines on July 30, 2016. The match up will pit WSOF Global Champion, Russia’s Evgeny Erokhin (14-4), vs WSOF Global #1 Contender, USA’s Richard “The Black Eagle” Odoms (11-2).

Richard Odoms made his debut with WSOF Global in Tokyo in February and was on hand to witness Evgeny win his championship. Odoms had a very powerful first round KO stoppage, flattening Japan’s Yusuke Kawaguchi in the first round with a knee to the head. Odoms has won three straight fights, with two of those wins coming by first round KO/TKO.

An interesting fact about each of these warriors is that when they aren’t training, they protect and serve with their respective police forces at home. Evgeny is a police officer in Khabarovsk, Russia; while Richard wears the badge in San Antonio, Texas.

“We have been focusing a lot of our efforts in early 2016 working with our affiliates in nine countries on five continents. We continue to build that program successfully. UGB-MMA in Philippines was our very first affiliate and paved the way for others. It just makes sense that Philippines would be the right market for us to put on our next big event,” lamented WSOF-GC Owner, Dunesa Hesser. “Not only will we be bringing fighters from across the globe to this event, but we will be highlighting some of UGB’s talented fighters as well.”

“Evgeny Erokhin has been on an amazing run over the last several years,” states Jason Lilly, Vice President of Operations and Matchmaker for WSOF-GC. “We are fortunate to have this MMA rising star represent us as our Global Champion, but The Black Eagle is soaring high himself. Erokhin hits like he has steel in his fists, but he has never faced someone as large as Odoms, who stands at 6’5” and cuts weight down from 300 pounds. Erokhin is a modest 6’1” 230. When you talk about David and Goliath stories, rarely is the Champion playing the role of David, but that’s the case here. This should be a ground-shaking, exciting main event. When you add in the intriguing storyline of Russian cop versus American cop, it’s almost like something out of an action movie.”

WSOF-GC will host WSOF-GC 3 Philippines at Smart Araneta Coliseum on July 30, 2016. Tickets start at PHP300 with ringside seats available for PHP4000. Tickets are now on sale at http://ticketnet.com.ph/WSOF-GC3-Philippines--Smart-Araneta-Coliseum/EventDetails/431. Smart Araneta Coliseum has been host to many great events over the years, but is most notably known for Ali vs Frazier III “The Thrilla in Manila”.


*This is Press Release
Posted by Boy Raket at 7:08 AM